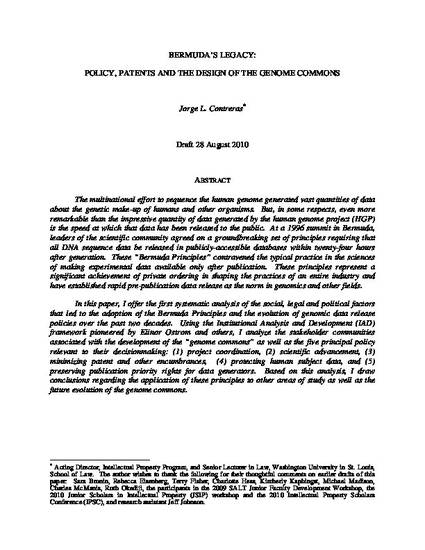 The multinational effort to sequence the human genome generated vast quantities of data about the genetic make-up of humans and other organisms. But, in some respects, even more remarkable than the impressive quantity of data generated by the human genome project (HGP) is the speed at which that data has been released to the public. At a 1996 summit in Bermuda, leaders of the scientific community agreed on a groundbreaking set of principles requiring that all DNA sequence data be released in publicly-accessible databases within twenty-four hours after generation. These “Bermuda Principles” contravened the typical practice in the sciences of making experimental data available only after publication. These principles represent a significant achievement of private ordering in shaping the practices of an entire industry and have established rapid pre-publication data release as the norm in genomics and other fields.

In this paper, I offer the first systematic analysis of the social, legal and political factors that led to the adoption of the Bermuda Principles and the evolution of genomic data release policies over the past two decades. Using the Institutional Analysis and Development (IAD) framework pioneered by Elinor Ostrom and others, I analyze the stakeholder communities associated with the development of the “genome commons” as well as the five principal policy relevant to their decisionmaking: (1) project coordination, (2) scientific advancement, (3) minimizing patent and other encumbrances, (4) protecting human subject data, and (5) preserving publication priority rights for data generators. Based on this analysis, I draw conclusions regarding the application of these principles to other areas of study as well as the future evolution of the genome commons.