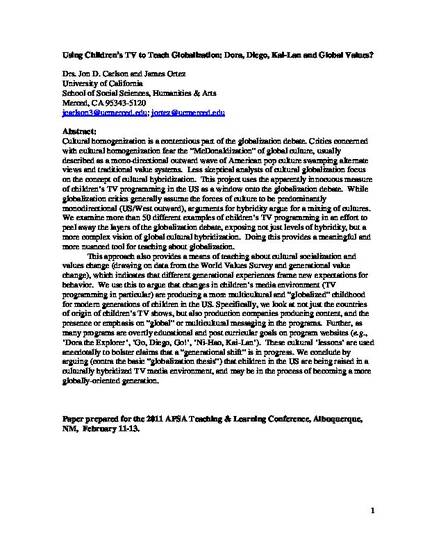 Cultural homogenization is a contentious part of the globalization debate. Critics concerned with cultural homogenization fear the “McDonaldization” of global culture, usually described as a mono-directional outward wave of American pop culture swamping alternate views and traditional value systems. Less skeptical analysts of cultural globalization focus on the concept of cultural hybridization. This project uses the apparently innocuous measure of children’s TV programming in the US as a window onto the globalization debate. While globalization critics generally assume the forces of culture to be predominantly monodirectional (US/West outward), arguments for hybridity argue for a mixing of cultures. We examine more than 50 different examples of children’s TV programming in an effort to peel away the layers of the globalization debate, exposing not just levels of hybridity, but a more complex vision of global cultural hybridization. Doing this provides a meaningful and more nuanced tool for teaching about globalization.

This approach also provides a means of teaching about cultural socialization and values change (drawing on data from the World Values Survey and generational value change), which indicates that different generational experiences frame new expectations for behavior. We use this to argue that changes in children’s media environment (TV programming in particular) are producing a more multicultural and “globalized” childhood for modern generations of children in the US. Specifically, we look at not just the countries of origin of children’s TV shows, but also production companies producing content, and the presence or emphasis on “global” or multicultural messaging in the programs. Further, as many programs are overtly educational and post curricular goals on program websites (e.g., ‘Dora the Explorer’, ‘Go, Diego, Go!’, ‘Ni-Hao, Kai-Lan’). These cultural ‘lessons’ are used anecdotally to bolster claims that a “generational shift” is in progress. We conclude by arguing (contra the basic “globalization thesis”) that children in the US are being raised in a culturally hybridized TV media environment, and may be in the process of becoming a more globally-oriented generation.