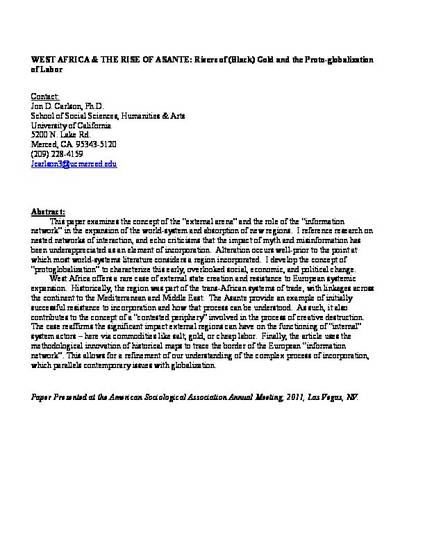 This article examines the concept of the ‘external arena’ and the role of the ‘information network’ in the expansion of the world-system and incorporation of new regions. I reference research on nested networks of interaction, and echo criticisms that the impact of myth and misinformation has been underappreciated as an element of incorporation. Alteration occurs well-prior to the point at which most world-systems literature considers a region incorporated. I develop the concept of “protoglobalization” to characterize this early, overlooked social, economic, and political change.

West Africa offers a rare case of external state creation and resistance to European expansion. Historically, the region was part of the trans-African systems of trade, with linkages across the continent to the Mediterranean and Middle East. The Asante provide an example of initially successful resistance to incorporation and how that process can be understood. As such, it also contributes to the concept of a ‘contested periphery’. The case reaffirms the significant impact external regions can have on the functioning of “internal” system actors – here via commodities like salt, gold, or cheap labor. Finally, the article uses the methodological innovation of historical maps to trace the border of the European ‘information network’. This allows for a refinement of our understanding of the complex process of incorporation, which parallels contemporary issues with globalization.