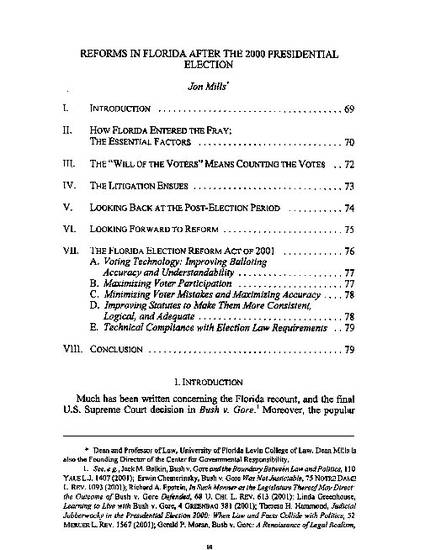 Much has been written concerning the Florida recount, and the final U.S. Supreme Court decision in Bush v. Gore. Moreover, the popular media has mostly focused on the negatives of the Florida recount without delving into the exact reasons why Florida became the epicenter of this controversy. Not much has been written pinpointing the actual circumstances precipitating Florida's position after the election, nor discussing the theoretical underpinning of Florida election law, which embraces a broad liberal concept of respecting the “will of the voter.”

By examining both the actual circumstances surrounding Florida in 2000 and recognizing that Florida election jurisprudence actually encourages broad judicial interpretations to include as many votes as possible, one can better understand the situation and not merely dismiss Florida as a state “where people don't know how to vote.” Surrounded with unanticipated factors, Florida's election laws, which aimed to include as many as possible in its elections, allowed time extensions for manual recounts of certain votes and accepted overseas ballots that did not technically comply with Florida law. This Article addresses these little noticed factors and elucidates the theoretical underpinning of Florida election jurisprudence: respecting the “will of the voter.”

Also, not much has been written that addresses the actual constructive reforms that have been enacted by the Florida Legislature since Bush v. Gore. This short Article addresses the movement for reform in Florida, which to date has yielded the recently enacted Florida Election Reform Act of 2001. This Article will also address this recent reform and analyze some of the most pertinent sections for such election reform.