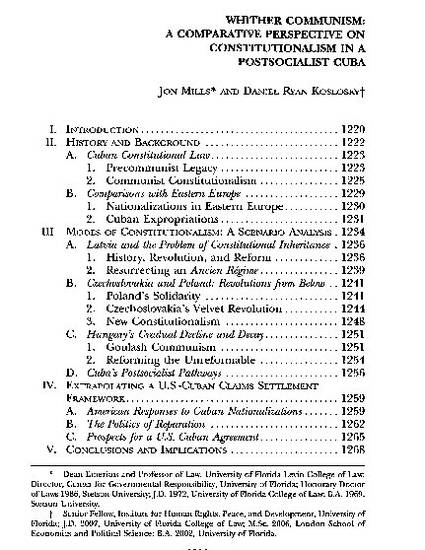 For over fifty years, Cuba has been a source of high-spirited political and policy debates. Its history and geostrategic position make it unique in American diplomatic and socioeconomic history. Interest in the island has not waned with the collapse of Communism in Eastern Europe and the former Soviet Union. On the contrary, Raul Castro’s assumption of Government has led many to begin asking how and under what circumstances political liberalization and economic transformation may occur in Cuba. This article examines the possible constitutional outcomes of a Cuba transition and introduces a framework for analyzing both Cuban economic reforms and US policy decisions. Both pre- and post-Communist Cuban constitutional law is examined, as are Cuba’s nationalizations and recent economic reforms. After, examining the economic nationalizations in Eastern Europe, a legal paradigm is developed on what this article calls “modes of constitutionalism.” By looking at how legitimacy vests, or illegitimacy develops in a nation, we can them predict how constitutional change may occur. This article examines three paradigms based on the transitions of Eastern Europe that are candidates for how an analogous transition may occur in Cuba. By looking at three levels - the state, government, and policy - we can project how democratic transitions, and new constitutional frameworks develop. From the models presented, this article examines the possibility of a US-Cuban claims settlement agreement. The current state of American law and politics as it pertains to Cuba is examined as are previous settlement agreements concluded for former Warsaw Pact nations. This article concludes with a discussion of how a claims settlement agreement may be negotiated in light of the various modes Cuban constitutionalism may take, and how US policymakers may increase the likelihoods of securing compensations for those aggrieved by the Castro regime.