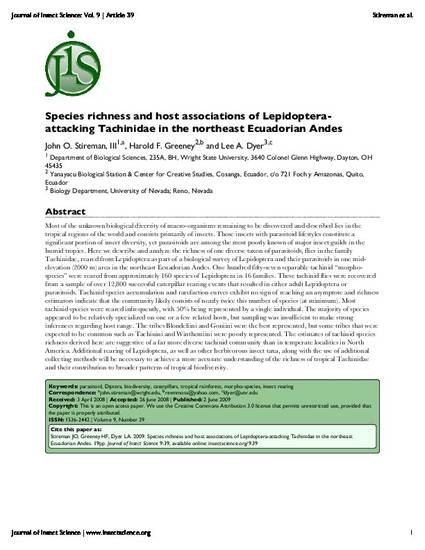 Article
Species Richness and Host Associations of Lepidoptera-Attacking Tachinidae in the Northeast Ecuadorian Andes
Journal of Insect Science
Download
Document Type
Article
Publication Date
Disciplines
Abstract
Most of the unknown biological diversity of macro-organisms remaining to be discovered and described lies in the tropical regions of the world and consists primarily of insects. Those insects with parasitoid lifestyles constitute a significant portion of insect diversity, yet parasitoids are among the most poorly known of major insect guilds in the humid tropics. Here we describe and analyze the richness of one diverse taxon of parasitoids, flies in the family Tachinidae, reared from Lepidoptera as part of a biological survey of Lepidoptera and their parasitoids in one mid-elevation (2000 m) area in the northeast Ecuadorian Andes. One hundred fifty-seven separable tachinid “morpho-species” were reared from approximately 160 species of Lepidoptera in 16 families. These tachinid flies were recovered from a sample of over 12,800 successful caterpillar rearing events that resulted in either adult Lepidoptera or parasitoids. Tachinid species accumulation and rarefaction curves exhibit no sign of reaching an asymptote and richness estimators indicate that the community likely consists of nearly twice this number of species (at minimum). Most tachinid species were reared infrequently, with 50% being represented by a single individual. The majority of species appeared to be relatively specialized on one or a few related hosts, but sampling was insufficient to make strong inferences regarding host range. The tribes Blondeliini and Goniini were the best represented, but some tribes that were expected to be common such as Tachinini and Winthemiini were poorly represented. The estimates of tachinid species richness derived here are suggestive of a far more diverse tachinid community than in temperate localities in North America. Additional rearing of Lepidoptera, as well as other herbivorous insect taxa, along with the use of additional collecting methods will be necessary to achieve a more accurate understanding of the richness of tropical Tachinidae and their contribution to broader patterns of tropical biodiversity.
Comments

This is an open-access article distributed under the terms of the Creative Commons Attribution License, which permits unrestricted use, distribution, and reproduction in any medium, provided the original work is properly cited.