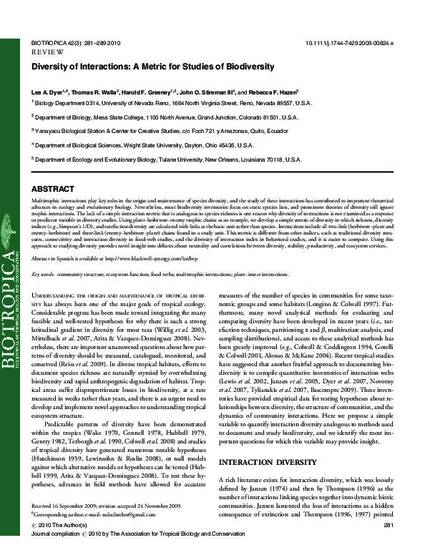 Multitrophic interactions play key roles in the origin and maintenance of species diversity, and the study of these interactions has contributed to important theoretical advances in ecology and evolutionary biology. Nevertheless, most biodiversity inventories focus on static species lists, and prominent theories of diversity still ignore trophic interactions. The lack of a simple interaction metric that is analogous to species richness is one reason why diversity of interactions is not examined as a response or predictor variable in diversity studies. Using plant-herbivore-enemy trophic chains as an example, we develop a simple metric of diversity in which richness, diversity indices (e.g., Simpson's 1/D), and rarefaction diversity are calculated with links as the basic unit rather than species. Interactions include all two-link (herbivore-plant and enemy-herbivore) and three-link (enemy-herbivore-plant) chains found in a study unit. This metric is different from other indices, such as traditional diversity measures, connectivity and interaction diversity in food-web studies, and the diversity of interaction index in behavioral studies, and it is easier to compute. Using this approach to studying diversity provides novel insight into debates about neutrality and correlations between diversity, stability, productivity, and ecosystem services.

© 2010 The Author(s). Journal compilation © 2010 by The Association for Tropical Biology and Conservation