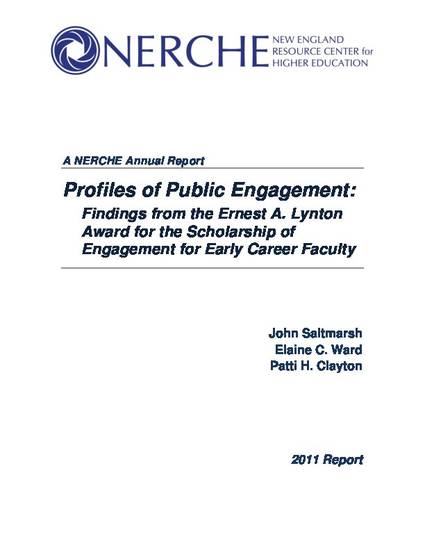 Other
A NERCHE Annual Report: Profiles of Public Engagement: Findings from the Ernest A. Lynton Award for the Scholarship of Engagement for Early Career Faculty
New England Resource Center for Higher Education Publications
Download
Document Type
Research Report
Publication Date
Disciplines
Abstract
Community-campus engagement has evolved significantly over the past quarter century, shaped by a number of factors. One has been the effort to reclaim the civic mission of American higher education. Frank Newman, while at the Carnegie Foundation for the Advancement of Teaching in the early 1980s, asserted that "the most critical demand is to restore to higher education its original purpose of preparing graduates for a life of involved and committed citizenship,” and concluded that “the advancement of civic learning, therefore, must become higher education's most central goal" (1985, xiv). Another factor has been the increased understanding that colleges and universities serve as “anchor institutions” (Axelrod & Dubb, 2010) and thus have responsibilities to their neighbors to act as “stewards of place” (American Association of State Colleges and Universities, 2002). There is also the influence of research in the cognitive sciences and developmental psychology that has provided a deep understanding of how students learn, highlighting the importance of validating prior experiences and gaining higher-order thinking skills through inquiry-based, problem-posing teaching and learning strategies that involve students in addressing important, trans-disciplinary issues in communities (National Research Council, 2000). Finally, there is an emerging awareness that generating knowledge increasingly requires new epistemological frameworks and research methods that honor and emphasize the “ecological” or interconnected nature of knowledge generation that includes but go well beyond the academy (Bjarnason & Coldstream, 2003; Gibbons et al., 1994; Saltmarsh, 2011). This last factor, in turn, is being driven especially by a new generation of scholars who are fundamentally oriented to networked knowledge generation and are creating integrated academic identities as engaged scholars (Sturm, Eatman, Saltmarsh, & Bush, 2011). In many ways, the Ernest A. Lynton Award for the Scholarship of Engagement is a product of this set of influences, particularly the evolution of perspectives on knowledge generation and the scholarly work of faculty. NERCHE created the annual Ernest A. Lynton Award in 1996 to recognize excellence in what was then called “Faculty Professional Service and Academic Outreach.” In 2007, it was renamed the Ernest A. Lynton Award for the Scholarship of Engagement to reflect shifts during the intervening decade toward a fundamentally more collaborative, integrative conceptualization of faculty work. What has not changed is the recognition of Ernest Lynton’s key contributions to engaged knowledge generation and its implications for faculty work and institutional change.
Comments

Learn more about the Ernest A. Lynton Award for the Scholarship of Engagement for Early Career Faculty.

Community Engaged/Serving
No, this is not community-engaged.
Citation Information
John Saltmarsh, Elaine C. Ward and Patti H. Clayton. "A NERCHE Annual Report: Profiles of Public Engagement: Findings from the Ernest A. Lynton Award for the Scholarship of Engagement for Early Career Faculty" (2011)
Available at: http://works.bepress.com/john_saltmarsh/3/