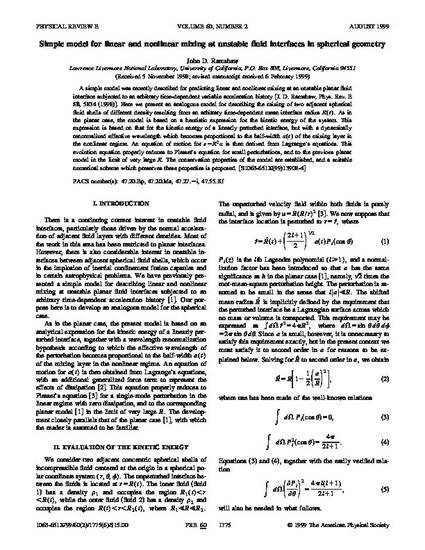 A simple model was recently described for predicting linear and nonlinear mixing at an unstable planar fluid interface subjected to an arbitrary time-dependent variable acceleration history [J. D. Ramshaw, Phys. Rev. E 58, 5834 (1998)]. Here we present an analogous model for describing the mixing of two adjacent spherical fluid shells of different density resulting from an arbitrary time-dependent mean interface radius R(t). As in the planar case, the model is based on a heuristic expression for the kinetic energy of the system. This expression is based on that for the kinetic energy of a linearly perturbed interface, but with a dynamically renormalized effective wavelength which becomes proportional to the half-width a(t) of the mixing layer in the nonlinear regime. An equation of motion for s=R²a is then derived from Lagrange's equations. This evolution equation properly reduces to Plesset's equation for small perturbations, and to the previous planar model in the limit of very large R. The conservation properties of the model are established, and a suitable numerical scheme which preserves these properties is proposed.