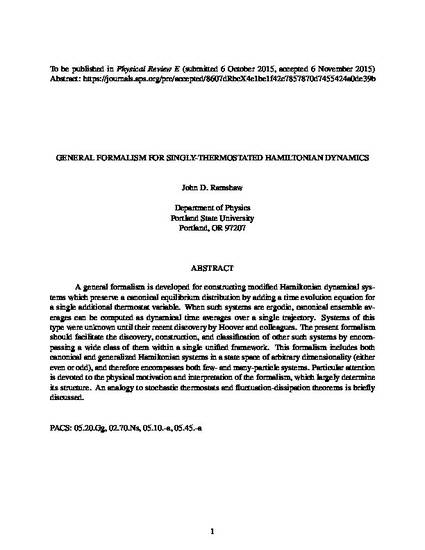 A general formalism is developed for constructing modified Hamiltonian dynamical systems which preserve a canonical equilibrium distribution by adding a time evolution equation for a single additional thermostat variable. When such systems are ergodic, canonical ensemble averages can be computed as dynamical time averages over a single trajectory. Systems of this type were unknown until their recent discovery by Hoover and colleagues. The present formalism should facilitate the discovery, construction, and classification of other such systems by encompassing a wide class of them within a single unified framework. This formalism includes both canonical and generalized Hamiltonian systems in a state space of arbitrary dimensionality (either even or odd), and therefore encompasses both few- and many-particle systems. Particular attention is devoted to the physical motivation and interpretation of the formalism, which largely determine its structure. An analogy to stochastic thermostats and fluctuation-dissipation theorems is briefly discussed.

The article is copyrighted by APS Journals (http://publish.aps.org/)