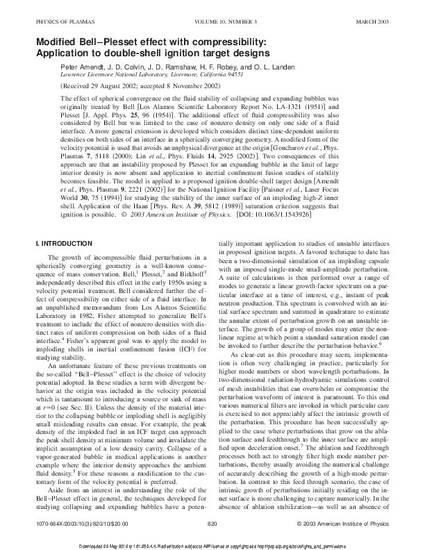 The effect of spherical convergence on the fluid stability of collapsing and expanding bubbles was originally treated by Bell [Los Alamos Scientific Laboratory Report No. LA-1321 (1951)] and Plesset [J. Appl. Phys. 25, 96 (1954)]. The additional effect of fluid compressibility was also considered by Bell but was limited to the case of nonzero density on only one side of a fluid interface. A more general extension is developed which considers distinct time-dependent uniform densities on both sides of an interface in a spherically converging geometry. A modified form of the velocity potential is used that avoids an unphysical divergence at the origin [Goncharov et al., Phys. Plasmas 7, 5118 (2000); Lin et al., Phys. Fluids 14, 2925 (2002)]. Two consequences of this approach are that an instability proposed by Plesset for an expanding bubble in the limit of large interior density is now absent and application to inertial confinement fusion studies of stability becomes feasible. The model is applied to a proposed ignition double-shell target design [Amendt et al., Phys. Plasmas 9, 2221 (2002)] for the National Ignition Facility [Paisner et al., Laser Focus World 30, 75 (1994)] for studying the stability of the inner surface of an imploding high-Z inner shell. Application of the Haan [Phys. Rev. A 39, 5812 (1989)] saturation criterion suggests that ignition is possible.

This is the publisher's final pdf. Article appears in Physics of Plasmas (http://pop.aip.org/) and is copyrighted by the American Institute of Physics (http://www.aip.org/)