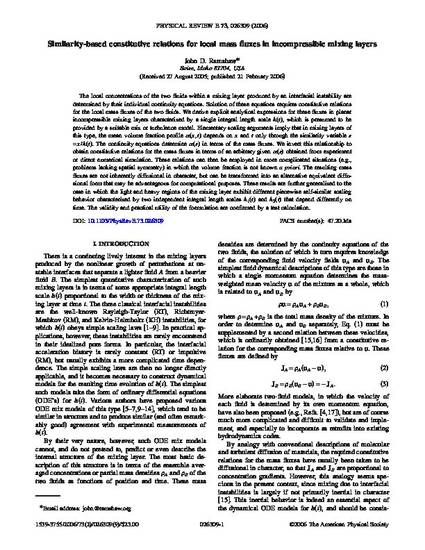 The local concentrations of the two fluids within a mixing layer produced by an interfacial instability are determined by their individual continuity equations. Solution of these equations requires constitutive relations for the local mass fluxes of the two fluids. We derive explicit analytical expressions for these fluxes in planar incompressible mixing layers characterized by a single integral length scale h(t), which is presumed to be provided by a suitable mix or turbulence model. Elementary scaling arguments imply that in mixing layers of this type, the mean volume fraction profile α(x,t) depends on x and t only through the similarity variable s=x∕h(t). The continuity equations determine α(s) in terms of the mass fluxes. We invert this relationship to obtain constitutive relations for the mass fluxes in terms of an arbitrary given α(s) obtained from experiment or direct numerical simulation. These relations can then be employed in more complicated situations (e.g., problems lacking spatial symmetry) in which the volume fraction is not known a priori. The resulting mass fluxes are not inherently diffusional in character, but can be transformed into an alternative equivalent diffusional form that may be advantageous for computational purposes. These results are further generalized to the case in which the light and heavy regions of the mixing layer exhibit different piecewise self-similar scaling behavior characterized by two independent integral length scales h₁(t) and h₂(t) that depend differently on time. The validity and practical utility of the formulation are confirmed by a test calculation.