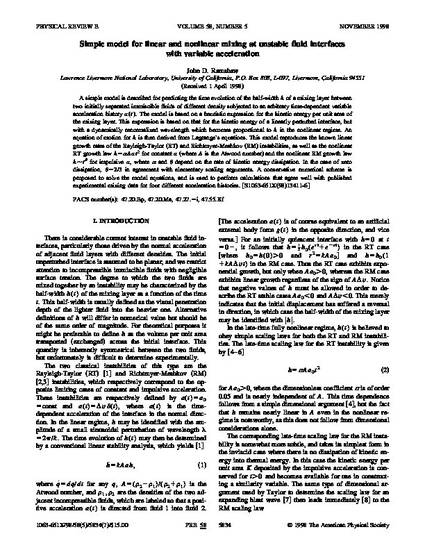 A simple model is described for predicting the time evolution of the half-width h of a mixing layer between two initially separated immiscible fluids of different density subjected to an arbitrary time-dependent variable acceleration history a(t). The model is based on a heuristic expression for the kinetic energy per unit area of the mixing layer. This expression is based on that for the kinetic energy of a linearly perturbed interface, but with a dynamically renormalized wavelength which becomes proportional to h in the nonlinear regime. An equation of motion for h is then derived from Lagrange's equations. This model reproduces the known linear growth rates of the Rayleigh-Taylor (RT) and Richtmyer-Meshkov (RM) instabilities, as well as the nonlinear RT growth law h=αAat2 for constant a (where A is the Atwood number) and the nonlinear RM growth law h~tθ for impulsive a, where α and θ depend on the rate of kinetic energy dissipation. In the case of zero dissipation, θ=2/3 in agreement with elementary scaling arguments. A conservative numerical scheme is proposed to solve the model equations, and is used to perform calculations that agree well with published experimental mixing data for four different acceleration histories.