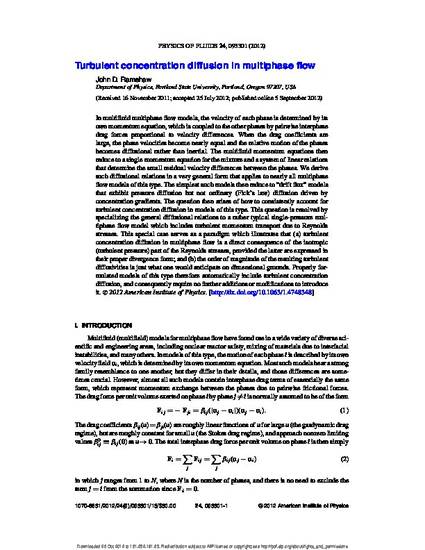 In multifluid multiphase flow models, the velocity of each phase is determined by its own momentum equation, which is coupled to the other phases by pairwise interphase drag forces proportional to velocity differences. When the drag coefficients are large, the phase velocities become nearly equal and the relative motion of the phases becomes diffusional rather than inertial. The multifluid momentum equations then reduce to a single momentum equation for the mixture and a system of linear relations that determine the small residual velocity differences between the phases. We derive such diffusional relations in a very general form that applies to nearly all multiphase flow models of this type. The simplest such models then reduce to 'drift flux' models that exhibit pressure diffusion but not ordinary (Fick's law) diffusion driven by concentration gradients. The question then arises of how to consistently account for turbulent concentration diffusion in models of this type. This question is resolved by specializing the general diffusional relations to a rather typical single-pressure multiphase flow model which includes turbulent momentum transport due to Reynolds stresses. This special case serves as a paradigm which illustrates that (a) turbulent concentration diffusion in multiphase flow is a direct consequence of the isotropic (turbulent pressure) part of the Reynolds stresses, provided the latter are expressed in their proper divergence form; and (b) the order of magnitude of the resulting turbulent diffusivities is just what one would anticipate on dimensional grounds. Properly formulated models of this type therefore automatically include turbulent concentration diffusion, and consequently require no further additions or modifications to introduce it.