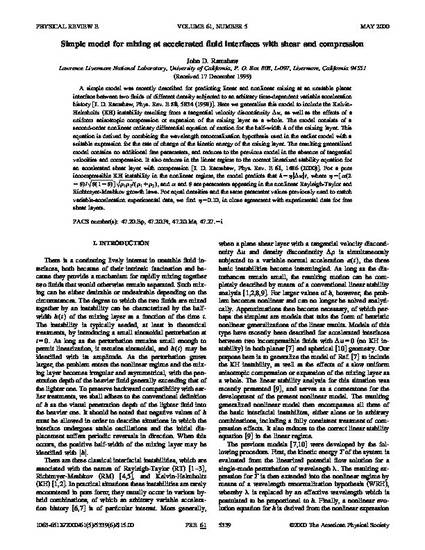 A simple model was recently described for predicting linear and nonlinear mixing at an unstable planar interface between two fluids of different density subjected to an arbitrary time-dependent variable acceleration history [J. D. Ramshaw, Phys. Rev. E 58, 5834 (1998)]. Here we generalize this model to include the Kelvin-Helmholtz (KH) instability resulting from a tangential velocity discontinuity delta u, as well as the effects of a uniform anisotropic compression or expansion of the mixing layer as a whole. The model consists of a second-order nonlinear ordinary differential equation of motion for the half-width h of the mixing layer. This equation is derived by combining the wavelength renormalization hypothesis used in the earlier model with a suitable expression for the rate of change of the kinetic energy of the mixing layer. The resulting generalized model contains no additional free parameters, and reduces to the previous model in the absence of tangential velocities and compression. It also reduces in the linear regime to the correct linearized stability equation for an accelerated shear layer with compression [J. D. Ramshaw, Phys. Rev. E 61, 1486 (2000)]. For a pure incompressible KH instability in the nonlinear regime, the model predicts that h = eta magnitude of delta u t, where eta = [alpha(2 - theta)/square root of theta(1 - theta)]square root of rho 1 rho 2/(rho 1 + rho 2), and alpha and theta are parameters appearing in the nonlinear Rayleigh-Taylor and Richtmyer-Meshkov growth laws. For equal densities and the same parameter values previously used to match variable-acceleration experimental data, we find eta = 0.10, in close agreement with experimental data for free shear layers.