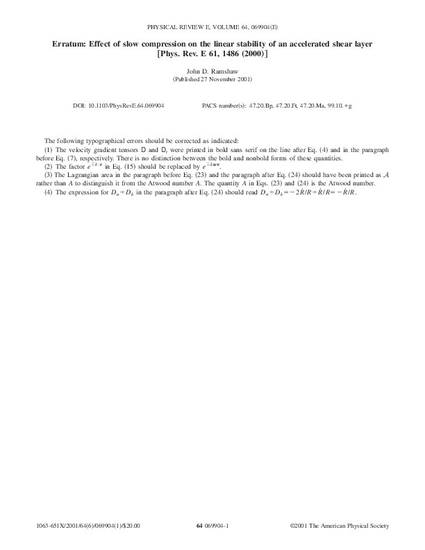 Article
Effect of Slow Compression on the Linear Stability of an Accelerated Shear Layer
Physical Review E
Download
Sponsor
This work was performed under the auspices of the U.S. Department of Energy by Lawrence Livermore National Laboratory under Contract No. W-7405-ENG-48.
Document Type
Article
Publication Date
Subjects
Disciplines
Abstract

An analysis is given of the effect of a slow uniform anisotropic compression or expansion on the linear stability of a normally accelerated planar interface between two fluids with different densities and tangential velocities, i.e., a combined Kelvin-Helmholtz and Rayleigh-Taylor instability, but generalized to an arbitrary time-dependent acceleration history. The compression is presumed to be sufficiently slow that the density remains uniform within each fluid and hence depends only on time. The perturbation is taken to be sinusoidal with amplitude h(t). The time evolution of h is determined by requiring pressure continuity across the interface in the usual way. The resulting linearized stability equation is a second-order linear ordinary differential equation for h(t). Compared to the corresponding well-known result for incompressible fluids, it is found that normal compression has the effect of reducing the perturbation growth rate h by an obvious geometrical correction, while transverse compression does not directly affect the net growth rate but rather has the dynamical effect of increasing its time derivative. When attention is focused on the masses transported across the initial interface rather than h, the purely geometrical effects of compression no longer appear explicitly, while the dynamical effects remain. It is thereby shown that both normal and transverse compression dynamically enhance the mixing of material masses, in spite of the corresponding purely geometrical reduction in h.

Erratum is available in below in the additional files.