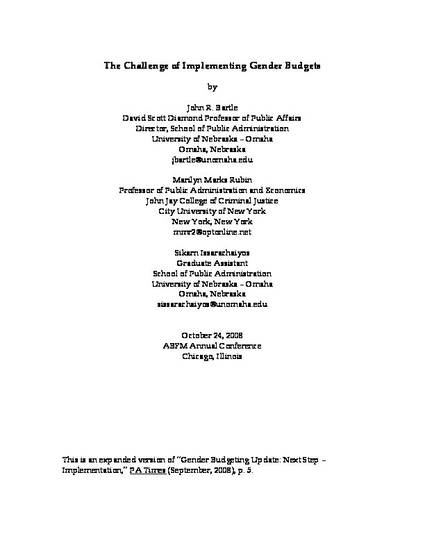 Article
The Challenge of Implementing Gender Budgets
Public Administration Faculty Proceedings & Presentations
Download
Document Type
Conference Proceeding
Publication Date
Disciplines
Abstract
Over the last three decades, countries all over the world, supported by the international community of nations, have been moving toward more equitable treatment of women. In 1979, the United Nations adopted the Convention on the Elimination of All Forms of Discrimination against Women (CEDAW), often referred to as the international bill of rights for women. CEDAW has been ratified by more than 90 percent of the nations in the world, with the United States the only industrialized nation in the world that has yet to ratify it. Delegates to the United Nations Fourth World Conference on Women held in Beijing in 1995 re-affirmed CEDAW and extended its purview by calling on governments to incorporate a gender perspective in their budget processes. Rubin and Bartle (2005) detailed the more than 60 initiatives that have been undertaken all over the world to look at budgets through a gender lens, and reviewed the lessons learned from these initiatives. They used the term “gender-responsive budget initiative” to include (1) the actual integration of a gender perspective into the budget cycle at the national or subnational level of government, and (2) an organized movement by civil society organizations to influence government to incorporate a gender perspective into its budget decisions. Here, we first briefly review some of the changes around the world in gender budgeting to update the 2005 study. Then we look in more depth at three initiatives in the US and Canada to gauge their progress in gender budgeting and to further understand what is necessary for success in implementing a gender-responsive budgeting initiative.
Comments

This paper was presented at the ABFM Annual Conference in Chicago, Illinois, October 24, 2008. Used by permission.