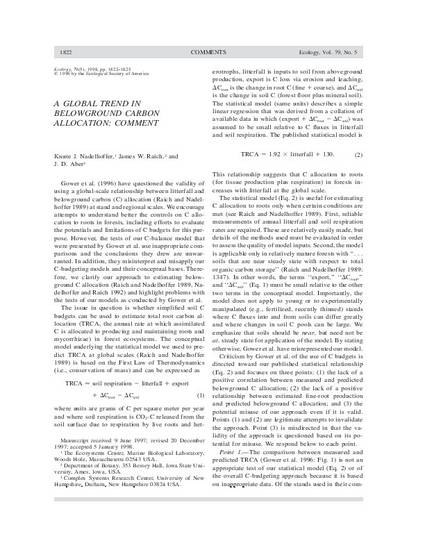 Gower et al. (1996) have questioned the validity of using a global-scale relationship between litterfall and belowground carbon (C) allocation (Raich and Nadelhoffer 1989) at stand and regional scales. We encourage attempts to understand better the controls on C allocation to roots in forests, including efforts to evaluate the potentials and limitations of C budgets for this purpose. However, the tests of our C-balance model that were presented by Gower et al. use inappropriate comparisons and the conclusions they drew are unwar ranted. In addition, they misinterpret and misapply our C-budgeting models and their conceptual bases. Therefore, we clarify our approach to estimating belowground C allocation (Raich and Nadelhoffer 1989, Nadelhoffer and Raich 1992) and highlight problems with the tests of our models as conducted by Gower et al. The issue in question is whether simplified soil C budgets can be used to estimate total root carbon allocation (TRCA, the annual rate at which assimilated C is allocated to producing and maintaining roots and mycorrhizae) in forest ecosystems. The conceptual model underlying the statistical model we used to predict TRCA at global scales (Raich and Nadelhoffer1989) is based on the First Law of Thermodynamics (i.e., conservation of mass) and can be expressed as TRCA = soil respiration - litterfall + export + ACroot - ACsoiI (1) where units are grams of C per square meter per year and where soil respiration is C02-C released from the soil surface due to respiration by live roots and het- erotrophs, litterfall is inputs to soil from aboveground production, export is C loss via erosion and leaching, ACroot is the change in root C (fine + coarse), and AC0oil is the change in soil C (forest floor plus mineral soil). The statistical model (same units) describes a simple linear regression that was derived from a collation of available data in which (export + ACroot - ACSOj) was assumed to be small relative to C fluxes in litterfall and soil respiration. The published statistical model is TRCA = 1.92 X litterfall + 130. (2) This relationship suggests that C allocation to roots (for tissue production plus respiration) in forests increases with litterfall at the global scale.