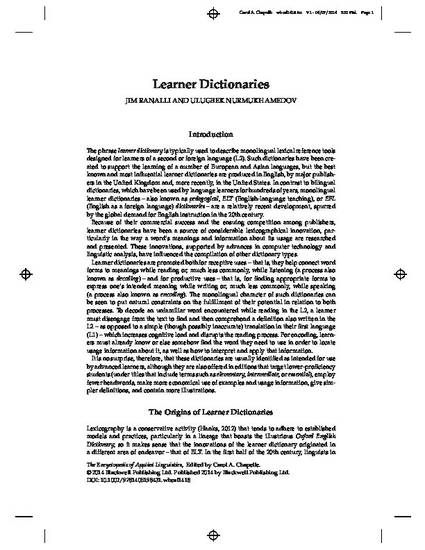 The phrase learner dictionary is typically used to describe monolingual lexical reference tools designed for learners of a second or foreign language (L2). Such dictionaries have been created to support the learning of a number of European and Asian languages, but the best known and most in!uential learner dictionaries are produced in English, by major publishers in the United Kingdom and, more recently, in the United States. In contrast to bilingual dictionaries, which have been used by language learners for hundreds of years, monolingual learner dictionaries – also known as pedagogical, ELT (English-language teaching), or EFL (English as a foreign language) dictionaries – are a relatively recent development, spurred by the global demand for English instruction in the 20th century. Because of their commercial success and the ensuing competition among publishers, learner dictionaries have been a source of considerable lexicographical innovation, particularly in the way a word’s meanings and information about its usage are researched and presented. These innovations, supported by advances in computer technology and linguistic analysis, have in!uenced the compilation of other dictionary types. Learner dictionaries are promoted both for receptive uses – that is, they help connect word forms to meanings while reading or, much less commonly, while listening (a process also known as decoding) – and for productive uses – that is, for "nding appropriate forms to express one’s intended meaning while writing or, much less commonly, while speaking (a process also known as encoding). The monolingual character of such dictionaries can be seen to put natural constraints on the ful"llment of their potential in relation to both processes. To decode an unfamiliar word encountered while reading in the L2, a learner must disengage from the text to "nd and then comprehend a de"nition also written in the L2 – as opposed to a simple (though possibly inaccurate) translation in their "rst language (L1) – which increases cognitive load and disrupts the reading process. For encoding, learners must already know or else somehow "nd the word they need to use in order to locate usage information about it, as well as how to interpret and apply that information. It is no surprise, therefore, that these dictionaries are usually identi"ed as intended for use by advanced learners, although they are also offered in editions that target lower-pro"ciency students (under titles that include terms such as elementary, intermediate, or essential), employ fewer headwords, make more economical use of examples and usage information, give simpler de"nitions, and contain more illustrations.

This is the peer reviewed version of the following article:Ranalli, J., & Nurmukhadev, U. (2014). Learner dictionaries. In C. A. Chapelle (Ed.), The Encyclopedia of Applied Linguistics. Malden, MA: Wiley-Blackwell, which has been published in final 2 form at http://dx.doi.org/10.1002/9781405198431. This article may be used for non-commercial purposes in accordance with Wiley Terms and Conditions for Self-Archiving.