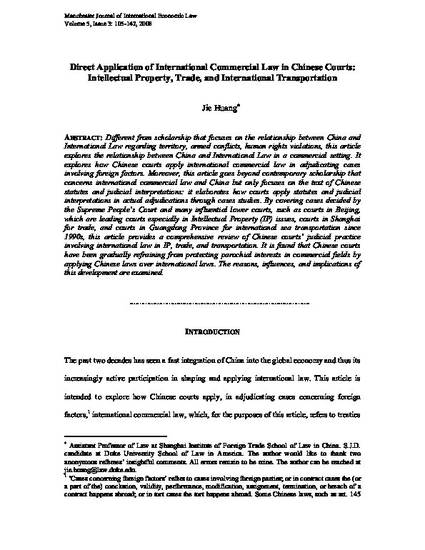 Different from scholarship that focuses on the relationship between China and International Law regarding territory, armed conflicts, human rights violations, this article explores the relationship between China and International Law in a commercial setting. It explores how Chinese courts apply international commercial law in adjudicating cases involving foreign factors. Moreover, this article goes beyond contemporary scholarship that concerns international commercial law and China but only focuses on the text of Chinese statutes and judicial interpretations: it elaborates how courts apply statutes and judicial interpretations in actual adjudications through cases studies. By covering cases decided by the Supreme People’s Court and many influential lower courts, such as courts in Beijing, which are leading courts especially in Intellectual Property (IP) issues, courts in Shanghai for trade, and courts in Guangdong Province for international sea transportation since 1990s, this article provides a comprehensive review of Chinese courts’ judicial practice involving international law in IP, trade, and transportation. It is found that Chinese courts have been gradually refraining from protecting parochial interests in commercial fields by applying Chinese laws over international laws. The reasons, influences, and implications of this development are examined.