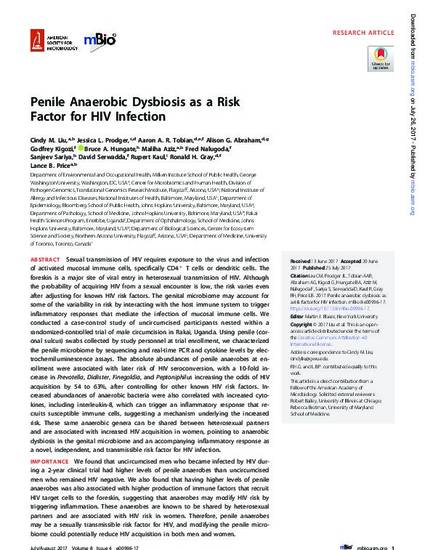 Sexual transmission of HIV requires exposure to the virus and infection of activated mucosal immune cells, specifically CD4+ T cells or dendritic cells. The foreskin is a major site of viral entry in heterosexual transmission of HIV. Although the probability of acquiring HIV from a sexual encounter is low, the risk varies even after adjusting for known HIV risk factors. The genital microbiome may account for some of the variability in risk by interacting with the host immune system to trigger inflammatory responses that mediate the infection of mucosal immune cells. We conducted a case-control study of uncircumcised participants nested within a randomized-controlled trial of male circumcision in Rakai, Uganda. Using penile (coronal sulcus) swabs collected by study personnel at trial enrollment, we characterized the penile microbiome by sequencing and real-time PCR and cytokine levels by electrochemiluminescence assays. The absolute abundances of penile anaerobes at enrollment were associated with later risk of HIV seroconversion, with a 10-fold increase in Prevotella, Dialister, Finegoldia, and Peptoniphilus increasing the odds of HIV acquisition by 54 to 63%, after controlling for other known HIV risk factors. Increased abundances of anaerobic bacteria were also correlated with increased cytokines, including interleukin-8, which can trigger an inflammatory response that recruits susceptible immune cells, suggesting a mechanism underlying the increased risk. These same anaerobic genera can be shared between heterosexual partners and are associated with increased HIV acquisition in women, pointing to anaerobic dysbiosis in the genital microbiome and an accompanying inflammatory response as a novel, independent, and transmissible risk factor for HIV infection.

IMPORTANCE We found that uncircumcised men who became infected by HIV during a 2-year clinical trial had higher levels of penile anaerobes than uncircumcised men who remained HIV negative. We also found that having higher levels of penile anaerobes was also associated with higher production of immune factors that recruit HIV target cells to the foreskin, suggesting that anaerobes may modify HIV risk by triggering inflammation. These anaerobes are known to be shared by heterosexual partners and are associated with HIV risk in women. Therefore, penile anaerobes may be a sexually transmissible risk factor for HIV, and modifying the penile microbiome could potentially reduce HIV acquisition in both men and women.

Reproduced with permission of the American Society for Microbiology. mBio