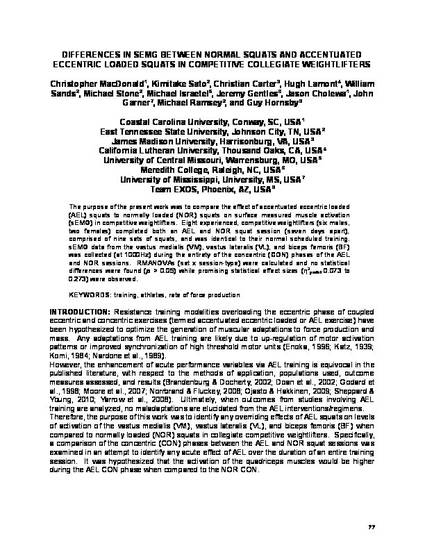 The purpose of the present work was to compare the effect of accentuated eccentric loaded (AEL) squats to normally loaded (NOR) squats on surface measured muscle activation (sEMG) in competitive weightlifters. Eight experienced, competitive weightlifters (six males, two females) completed both an AEL and NOR squat session (seven days apart), comprised of nine sets of squats, and was identical to their normal scheduled training. sEMG data from the vastus medialis (VM), vastus lateralis (VL), and biceps femoris (BF) was collected (at 1000Hz) during the entirety of the concentric (CON) phases of the AEL and NOR sessions. RMANOVAs (set x session-type) were calculated and no statistical differences were found (p > 0.05) while promising statistical effect sizes (?2 partial 0.073 to 0.273) were observed.

© The Author(s). This document was originally published in the Proceedings of the International Conference of Biomechanics in Sports.