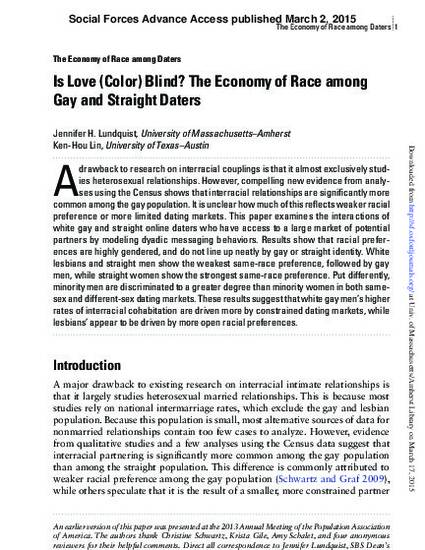 A drawback to research on interracial couplings is that it almost exclusively studies heterosexual relationships. However, compelling new evidence from analyses using the Census shows that interracial relationships are significantly more common among the gay population. It is unclear how much of this reflects weaker racial preference or more limited dating markets. This paper brings unique individual -level data rather than couple-level data to bear on what might be driving the difference. We examine the interactions of white gay and straight online daters who have access to a large market of potential partners by modeling dyadic messaging behaviors. Results show that preference behavior is highly gendered, and does not line up neatly by gay or straight identity. White lesbians and straight men show the weakest same-race preference, followed by gay men, while straight women show the strongest same-race preference. Our results indicate that white gay men’s higher rates of interracial cohabitation are driven more by constrained dating markets, while lesbians’ appear to be driven by more open racial preferences. This paper is the first to analyze the racial preferences of gays and lesbians in the mate selection process by directly observing online behavioral dynamics rather than stated preference.