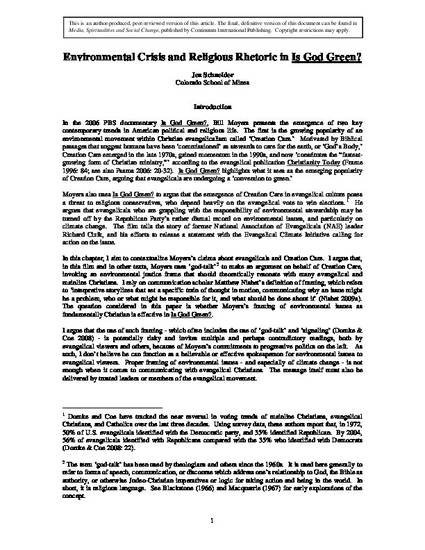 In the 2006 PBS documentary Is God Green?, Bill Moyers presents the emergence of two key contemporary trends in American political and religious life. The first is the growing popularity of an environmental movement within Christian evangelicalism called 'Creation Care'. Motivated by biblical passages that suggest humans have been 'commissioned' as stewards to care for the earth, or 'God's Body', Creation Care emerged in the late 1970s, gained momentum in the 1990s, and now 'constitutes the "fastest-growing form of Christian ministry"', according to the evangelical publication Christianity Today (Frame 1996:84, see also Psaros 2006:20-32). Is God Green? highlights what it sees as the emerging popularity of Creation Care, arguing that evangelicals are undergoing a 'conversion to green'.