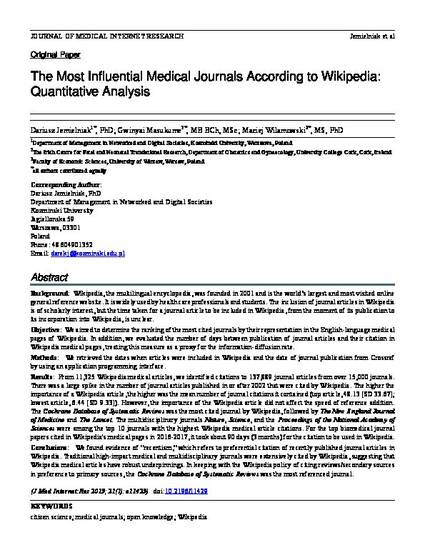 Article
The Most Influential Medical Journals According to Wikipedia: Quantitative Analysis
Journal of Medical Information Research (2019)
Download Find in your library
Abstract
BackgroundWikipedia, the multilingual encyclopedia, was founded in 2001 and is the world’s largest and most visited online general reference work. Wikipedia is widely used by healthcare professionals and students. The inclusion of journal articles into Wikipedia is of scholarly interest yet it is unclear how long it takes for a journal article to be included, from the moment of its publication to its incorporation into Wikipedia.
Objectives
We sought to determine the ranking of the most cited journals by their representation in the English language Wikipedia medical pages. In addition we evaluated the number of days between journal articles being published and their citation in Wikipedia medical pages, treating this as a proxy for information diffusion rate.
Methods
We retrieved the dates of article inclusion on Wikipedia, as well as the date of journal publication from Crossref by way of application programming interface.
ResultsWe found citations to 137,889 journal articles from over 15,000 journals, in 11,325 Wikipedia medical articles. There was a big spike in the number of journal articles published in or after 2002 that were cited by Wikipedia. The higher the importance of a Wikipedia article, the more mean (standard deviation - ±SD) journal citations on average it contained; top importance=48.13±33.67, low importance=6.44±9.33. However the importance of the Wikipedia article did not affect the speed of reference addition.
The Cochrane Database of Systematic Reviews, The New England Journal of Medicine and The Lancet were the most cited journals by Wikipedia, in that order. The multidisciplinary journals Nature, Science and the Proceedings of the National Academy of Sciences were within the top ten journals by Wikipedia medical article citation. For the top biomedical journal papers cited in Wikipedia's medical pages in 2016/7, it took about 90 days (three months) for the citation to be used in Wikipedia.
Conclusion: We found evidence of recentisim, whereby recently published journal articles are preferentially cited in Wikipedia. Traditional high impact medical and multidisciplinary journals were highly cited by Wikipedia suggesting that Wikipedia medical articles have robust underpinnings. In keeping with the Wikipedia policy of citing reviews/secondary sources in preference to primary sources, The Cochrane Database of Systematic Reviews was the most referenced journal.
Keywords
Disciplines
Publication Date
DOI
10.2196/11429
Citation Information
Dariusz Jemielniak, Gwinyai Masukume and Maciej Wilamowski. "The Most Influential Medical Journals According to Wikipedia: Quantitative Analysis" Journal of Medical Information Research Vol. 21 Iss. 1 (2019) p. e11429 ISSN: 1438-8871
Available at: http://works.bepress.com/jemielniak/44/
Creative Commons license