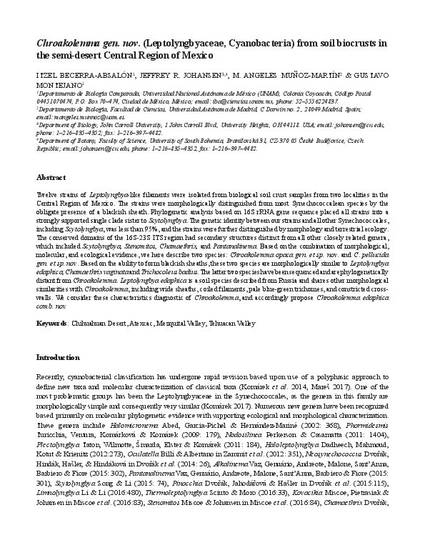 Twelve strains of Leptolyngbya-like filaments were isolated from biological soil crust samples from two localities in the Central Region of Mexico. The strains were morphologically distinguished from most Synechococcalean species by the obligate presence of a blackish sheath. Phylogenetic analysis based on 16S rRNA gene sequence placed all strains into a strongly supported single clade sister to Scytolyngbya. The genetic identity between our strains and all other Synechococcales, including Scytolyngbya, was less than 95%, and the strains were further distinguished by morphology and terrestrial ecology. The conserved domains of the 16S-23S ITS region had secondary structures distinct from all other closely related genera, which included Scytolyngbya, Stenomitos, Chamaethrix, and Pantanalinema. Based on the combination of morphological, molecular, and ecological evidence, we here describe two species: Chroakolemma opaca gen. et sp. nov. and C. pellucida gen. et sp. nov. Based on the ability to form blackish sheaths, these two species are morphologically similar to Leptolyngbya edaphica, Chamaethrix vaginata and Trichocoleus badius. The latter two species have been sequenced and are phylogenetically distant from Chroakolemma. Leptolyngbya edaphica is a soil species described from Russia and shares other morphological similarities with Chroakolemma, including wide sheaths, coiled filaments, pale blue-green trichomes, and constricted cross- walls. We consider these characteristics diagnostic of Chroakolemma, and accordingly propose Chroakolemma edaphica comb. nov.