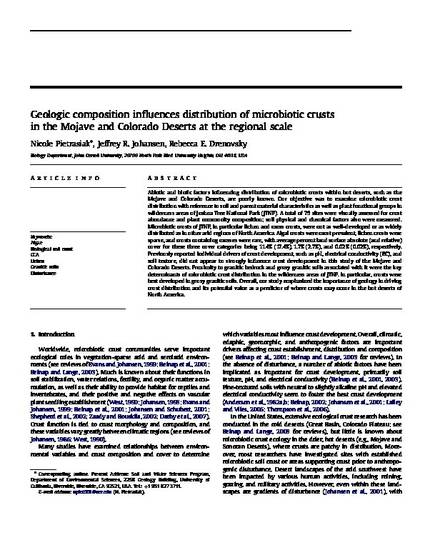 Abiotic and biotic factors inﬂuencing distribution of microbiotic crusts within hot deserts, such as the Mojave and Colorado Deserts, are poorly known. Our objective was to examine microbiotic crust distribution with reference to soil and parent material characteristics as well as plant functional groups in wilderness areas of Joshua Tree National Park (JTNP). A total of 75 sites were visually assessed for crust abundance and plant community composition; soil physical and chemical factors also were measured. Microbiotic crusts of JTNP, in particular lichen and moss crusts, were not as well-developed or as widely distributed as in other arid regions of North America. Algal crusts were most prevalent, lichen crusts were sparse, and crusts containing mosses were rare, with average percent land surface absolute (and relative) cover for these three cover categories being 11.4% (17.4%), 1.7% (2.7%), and 0.02% (0.02%), respectively. Previously reported individual drivers of crust development, such as pH, electrical conductivity (EC), and soil texture, did not appear to strongly inﬂuence crust development in this study of the Mojave and Colorado Deserts. Proximity to granitic bedrock and grusy granitic soils associated with it were the key determinants of microbiotic crust distribution in the wilderness areas of JTNP. In particular, crusts were best developed in grusy granitic soils. Overall, our study emphasized the importance of geology in driving crust distribution and its potential value as a predictor of where crusts may occur in the hot deserts of North America.