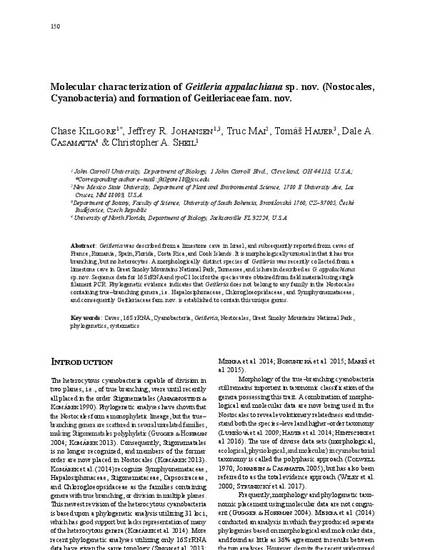 Geitleria was described from a limestone cave in Israel, and subsequently reported from caves of France, Romania, Spain, Florida, Costa Rica, and Cook Islands. It is morphologically unusual in that it has true branching, but no heterocytes. A morphologically distinct species of Geitleria was recently collected from a limestone cave in Great Smoky Mountains National Park, Tennessee, and is herein described as G. appalachiana sp. nov. Sequence data for 16S rRNA and rpoC1 loci for the species were obtained from field material using single filament PCR. Phylogenetic evidence indicates that Geitleria does not belong to any family in the Nostocales containing true–branching genera, i.e. Hapalosiphonaceae, Chlorogloeopsidaceae, and Symphyonemataceae, and consequently Geitleriaceae fam. nov. is established to contain this unique genus.