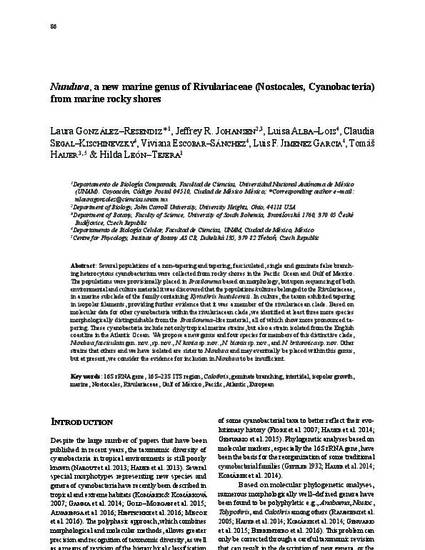 Several populations of a non–tapering and tapering, fasciculated, single and geminate false branch- ing heterocytous cyanobacterium were collected from rocky shores in the Pacific Ocean and Gulf of Mexico. The populations were provisionally placed in Brasilonema based on morphology, but upon sequencing of both environmental and culture material it was discovered that the populations/cultures belonged to the Rivulariaceae, in a marine subclade of the family containing Kyrtuthrix huatulcensis. In culture, the taxon exhibited tapering in isopolar filaments, providing further evidence that it was a member of the rivulariacean clade. Based on molecular data for other cyanobacteria within the rivulariacean clade, we identified at least three more species morphologically distinguishable from the Brasilonema–like material, all of which show more pronounced ta- pering. These cyanobacteria include not only tropical marine strains, but also a strain isolated from the English coastline in the Atlantic Ocean. We propose a new genus and four species for members of this distinctive clade, Nunduva fasciculata gen. nov., sp. nov., N. kania sp. nov., N. biania sp. nov., and N. britannica sp. nov. Other strains that others and we have isolated are sister to Nunduva and may eventually be placed within this genus, but at present, we consider the evidence for inclusion in Nunduva to be insufficient.