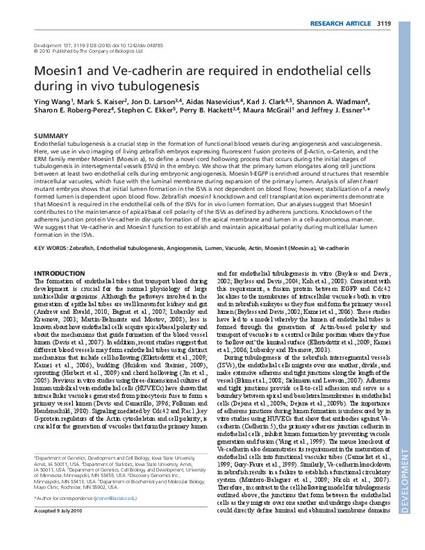 Article
Moesin1 and Ve-cadherin are required in endothelial cells during in vivo tubulogenesis
Development
Download Find in your library
Document Type
Article
Disciplines
Publication Version
Published Version
Publication Date
DOI
10.1242/dev.048785
Abstract
Endothelial tubulogenesis is a crucial step in the formation of functional blood vessels during angiogenesis and vasculogenesis. Here, we use in vivo imaging of living zebrafish embryos expressing fluorescent fusion proteins of β-Actin, α-Catenin, and the ERM family member Moesin1 (Moesin a), to define a novel cord hollowing process that occurs during the initial stages of tubulogenesis in intersegmental vessels (ISVs) in the embryo. We show that the primary lumen elongates along cell junctions between at least two endothelial cells during embryonic angiogenesis. Moesin1-EGFP is enriched around structures that resemble intracellular vacuoles, which fuse with the luminal membrane during expansion of the primary lumen. Analysis of silent heart mutant embryos shows that initial lumen formation in the ISVs is not dependent on blood flow; however, stabilization of a newly formed lumen is dependent upon blood flow. Zebrafish moesin1 knockdown and cell transplantation experiments demonstrate that Moesin1 is required in the endothelial cells of the ISVs for in vivo lumen formation. Our analyses suggest that Moesin1 contributes to the maintenance of apical/basal cell polarity of the ISVs as defined by adherens junctions. Knockdown of the adherens junction protein Ve-cadherin disrupts formation of the apical membrane and lumen in a cell-autonomous manner. We suggest that Ve-cadherin and Moesin1 function to establish and maintain apical/basal polarity during multicellular lumen formation in the ISVs.
Comments