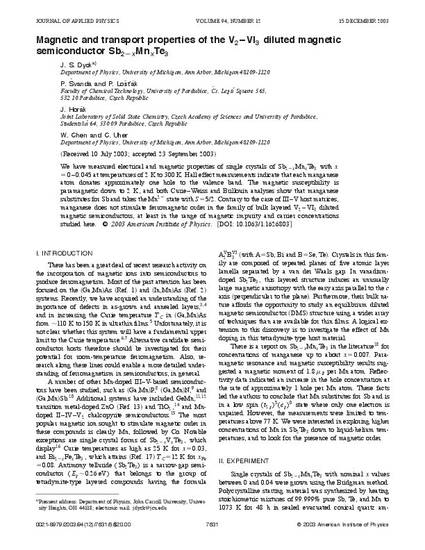 We have measured electrical and magnetic properties of single crystals of Sb2_xMnxTe3 with x =0 – 0.045 at temperatures of 2 K to 300 K. Hall effect measurements indicate that each manganese atom donates approximately one hole to the valence band. The magnetic susceptibility is paramagnetic down to 2 K, and both Curie–Weiss and Brillouin analyses show that manganese substitutes for Sb and takes the Mn2+ state with S=5/2. Contrary to the case of III–V host matrices, manganese does not stimulate ferromagnetic order in the family of bulk layered V2– VI3 diluted magnetic semiconductors, at least in the range of magnetic impurity and carrier concentrations studied here.