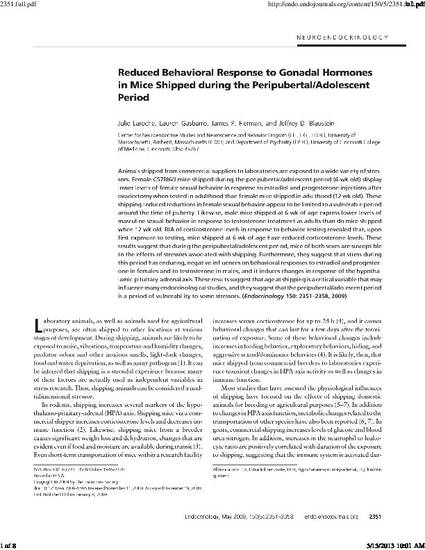 Animals shipped from commercial suppliers to laboratories are exposed to a wide variety of stressors. Female C57Bl6/J mice shipped during the peripubertal/adolescent period (6 wk old) display lower levels of female sexual behavior in response to estradiol and progesterone injections after ovariectomy when tested in adulthood than female mice shipped in adulthood (12 wk old). These shipping-induced reductions in female sexual behavior appear to be limited to a vulnerable period around the time of puberty. Likewise, male mice shipped at 6 wk of age express lower levels of masculine sexual behavior in response to testosterone treatment as adults than do mice shipped when 12 wk old. RIA of corticosterone levels in response to behavior testing revealed that, upon first exposure to testing, mice shipped at 6 wk of age have reduced corticosterone levels. These results suggest that during the peripubertal/adolescent period, mice of both sexes are susceptible to the effects of stressors associated with shipping. Furthermore, they suggest that stress during this period has enduring, negative influences on behavioral responses to estradiol and progesterone in females and to testosterone in males, and it induces changes in response of the hypothalamic-pituitary-adrenal axis. These results suggest that age at shipping is a critical variable that may influence many endocrinological studies, and they suggest that the peripubertal/adolescent period is a period of vulnerability to some stressors.