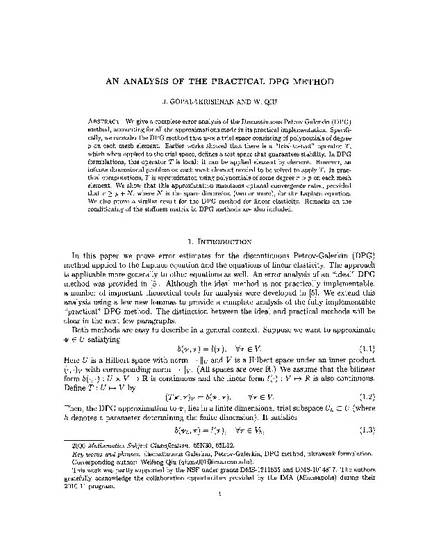 We give a complete error analysis of the Discontinuous Petrov Galerkin (DPG) method, accounting for all the approximations made in its practical implementation. Specifically, we consider the DPG method that uses a trial space consisting of polynomials of degree p on each mesh element. Earlier works showed that there is a "trial-to-test" operator T, which when applied to the trial space, defines a test space that guarantees stability. In DPG formulations, this operator T is local: it can be applied element-by-element. However, an infinite dimensional problem on each mesh element needed to be solved to apply T. In practical computations, T is approximated using polynomials of some degree r > p on each mesh element. We show that this approximation maintains optimal convergence rates, provided that r p + N, where N is the space dimension (two or more), for the Laplace equation. We also prove a similar result for the DPG method for linear elasticity. Remarks on the conditioning of the stiffness matrix in DPG methods are also included.

This is the author’s version of a work that was accepted for publication. First published in Mathematics of Computation in Vol 83, No 286, published by the American Mathematical Society.