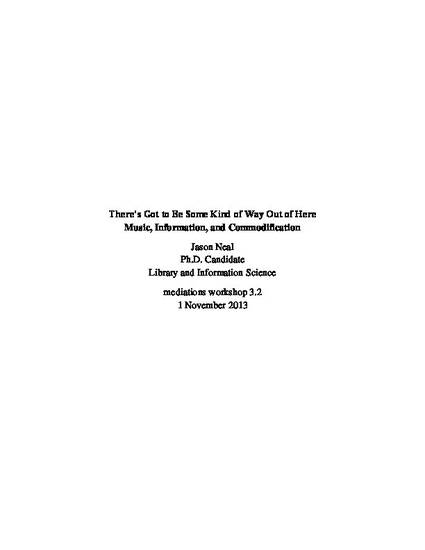 Presentation
There’s got to be some kind of way out of here: Music, information, categorization, and commodification
mediations workshop 3.2, University of Western Ontario (2013)
Download
Abstract

The increasing ubiquity of digital technologies has facilitated the merging of media content and their metadata within multiple indexing and retrieval systems. In the case of recorded music, individuals can download and store digitized audio (as well as video) content on computers and portable media devices. Conversely, with the emergence of social networking platforms, users can share files, as well as textual content (e.g. comments, reviews, and tags), by uploading them to Websites with music-related content. Ideally, these conditions allow users to connect with others who share similar musical interests, to interact with a greater diversity of music than in the previous century of recorded sound, and perhaps even to expand notions of musical similarity beyond genre-based categories.

Despite the promise that such developments appear to hold, a number of challenges remain in considering the extent to which broader musical exploration and discovery actually occur. It is necessary to discuss them within several contexts, including the following:

• The reification of genre as the primary way of categorizing recorded music.

• The indirect influence of genre on recommender systems, whose algorithms primarily focus on consumer behaviours.

• The expansion of intellectual property laws that have heightened the degree of music commodification.

• The ways in which technological determinism interacts with the aforementioned trends.

Drawing primarily upon the ideas of such theorists as Theodor W. Adorno, critical perspectives on the “culture industry” offer some possible frameworks within which to examine the problems that remain in relation to genre-based categorization of music. While systems that actively facilitate cross-genre exploration could provide potential alternatives, critical perspectives will continue to remain relevant. Especially if system developers assume that technocratic solutions are sufficient for remedying the inadequacies of genre-based categorization, and as intellectual property laws continue to clamp down on the sharing of musical content.