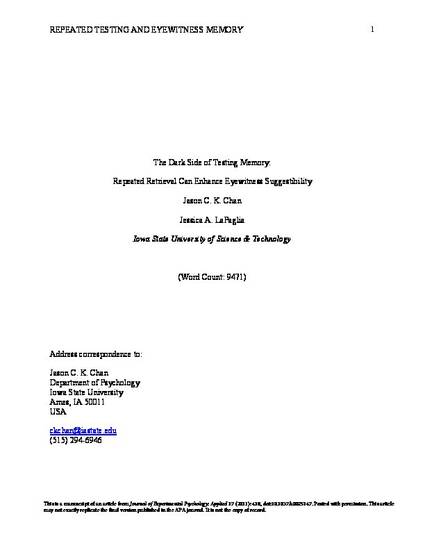 Eyewitnesses typically recount their experiences many times before trial. Such repeated retrieval can enhance memory retention of the witnessed event. However, recent studies (e.g., Chan, Thomas, & Bulevich, 2009) have found that initial retrieval can exacerbate eyewitness suggestibility to later misleading information—a finding termed retrieval-enhanced suggestibility (RES). Here we examined the influence of multiple retrieval attempts on eyewitness suggestibility to subsequent misinformation. In four experiments, we systematically varied the number of initial tests taken (between zero and six), the delay between initial testing and misinformation exposure (~30 min or 1 week), and whether initial testing was manipulated between- or within-subjects. University undergraduate students were used as participants. Overall, we found that eyewitness suggestibility increased as the number of initial tests increased, but this RES effect was qualified by the delay and by whether initial testing occurred in a within- or between-subjects manner. Specifically, the within-subjects RES effect was smaller than the between-subjects RES effect, possibly because of the influence of retrieval-induced forgetting/facilitation (Chan, 2009) when initial testing was manipulated within subjects. Moreover, consistent with the testing effect literature (Roediger & Karpicke, 2006), the benefits of repeated testing on later memory were stronger after a 1-week delay than after a 30-min delay, thus reducing the negative impact of RES in long-term situations. These findings suggest that conditions that are likely to occur in criminal investigations can either increase (repeated testing) or reduce (delay) the influence of RES, thus further demonstrating the complex relationship between eyewitness memory and repeated retrieval. (PsycINFO Database Record (c) 2012 APA, all rights reserved)

This is a manuscript of an article from Journal of Experimental Psychology: Applied 17 (2011): 418, doi:10.1037/a0025147. Posted with permission. This article may not exactly replicate the final version published in the APA journal. It is not the copy of record.