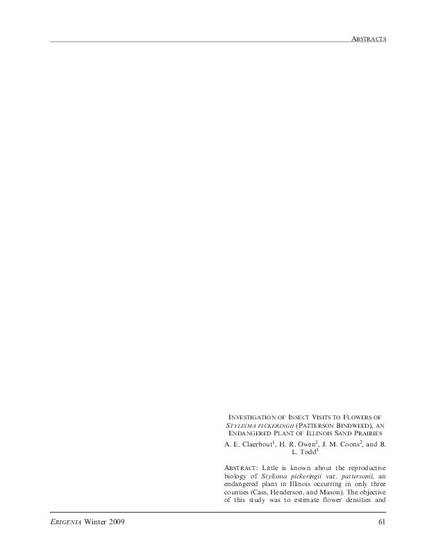 Little is known about the reproductive biology of Stylisma pickeringii var. pattersonii, an endangered plant in Illinois occurring in only three counties (Cass, Henderson, and Mason). The objective of this study was to estimate flower densities and temporal (time of day and seasonal) differences in insect visitation to flowers of S. pickeringii in 2002 for native populations in Henderson and Mason Counties. A 50 m transect was located where S. pickeringii was most abundant and quadrats (0.25 m2) were placed on alternate sides of the tape measure at every meter at random distances from the transect. The number of flowers was estimated for both Mason and Henderson Counties in July and August 2002. For insect visitations, three plots (1 m2) were located in patches where open S. pickeringii flowers were abundant. Insects visiting flowers were collected within the same plots for one hour starting at 10:00 A.M., 12:30 P.M., and 3:00 P.M. on July 9, 2002 (Henderson County) and on July 10, 2002 (Mason County). On August 21, 2002 in Mason County only, plots were observed for one hour starting only at 12:30 P.M.. Insects were collected with nets and placed in killing jars containing cyanide. The number of each insect species visiting flowers of S. pickeringii was recorded for each time. Pollen from the bodies of four insect visitors was compared to that from flowers. Mason County had significantly higher flower density with a mean of 131 6 17 flowers/m2. July is peak flowering time for S. pickeringii in Mason County, Illinois. Insect diversity was greater in Henderson County than in Mason County. No differences were noted for insect visits to flowers during different times of day in July at Henderson County, but visits were greatest from 3:00 to 4:00 P.M. at Mason County. Pollen collected from all insect visitors that were checked was similar in color, shape and size to pollen from flowers of S. pickeringii. These findings increase the understanding of plant-pollinator interactions for S. pickeringii and will support more informed management decisions.