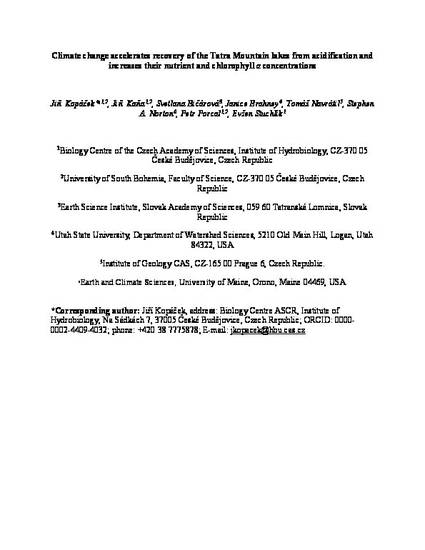 We evaluated changes in the concentration of cations, anions, nutrients (dissolved organic carbon, DOC; phosphorus, P; and nitrogen forms including nitrate, NO3− and total organic nitrogen, TON), and chlorophyll a (Chl-a) in 31 Tatra Mountain lakes in Slovakia and Poland during their recovery from acidic deposition (1992–2018). Typical effects of decreasing acidic deposition on the lakes’ water composition, such as decreasing base cation concentrations, were confounded by climate change and catchment characteristics, including areal proportions of well-developed soils and scree. A climate-related increase in physical erosion provided freshly exposed unweathered granodiorite (the dominant bedrock) to chemical weathering. Dissolution of accessory calcite in the granodiorite increased the in-lake Ca2+ and HCO3− concentrations and reversed the Ca2+ trends, which originally decreased in parallel with strong acid anions. These changes were most pronounced in steep, scree-rich areas, which are most sensitive to physical weathering. Fresh apatite [Ca5(PO4)3(F, Cl, OH)] in the crushed granodiorite acts as a P source at soil pH’s between 4 and 5 and in the presence of chelating organic acids within soils. These conditions enhance apatite solubility, which in part explains increasing P in lakes with scree-dominated catchments. Soil recovery from acidification due to decreasing acidic deposition and the neutralizing effect of weathering of erosion-derived accessory calcite were the most likely causes of elevated DOC and P export from soils. Their elevated leaching was accompanied by increasing in-lake concentrations of Chl-a and TON. The increasing TON concentrations were, as for Ca2+, most pronounced in the scree-rich catchments, and represented the most sensitive indicator of the changes in the lake water nutrient composition.

This is a pre-print of an article published in Climate Change Accelerates Recovery of the Tatra Mountain Lakes from Acidification and Increases Their Nutrient and Chlorophyll a Concentrations. The final authenticated version is available online at: https://doi.org/10.1007/s00027-019-0667-7