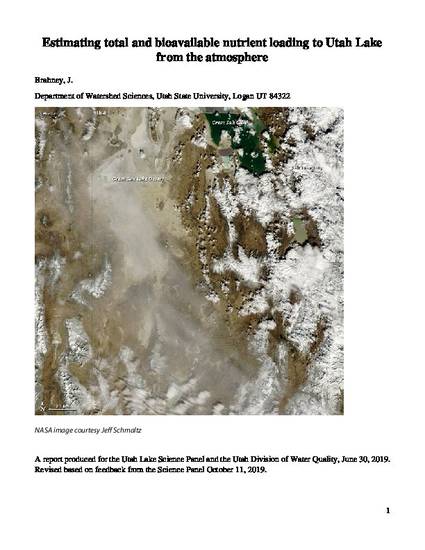 Anthropogenic activities have led to increases in the emission, atmospheric transport, and deposition of key nutrients. In addition, climate change along with anthropogenic soil disturbance has led to recent increases in the mobilization and transport of soils and other particles through the atmosphere, collectively described here as dust. These increased emissions have led to growing interest and concern over the composition of atmospheric deposition and total loading of nutrients to aquatic systems. In the last several decades, much effort has been directed towards the measurement and modeling of nitrogen deposition through wet and aerosol deposition. Less is known about the capacity for regional dusts to transport nutrients in meaningful quantities in space and time. This paper summarizes the state of knowledge on dust deposition, composition, and potential effects on aquatic ecosystems. More specifically, this paper focuses on the potential for atmospheric aerosol, dust, and wet deposition to contribute phosphorus and nitrogen to Utah Lake in Provo, Utah. As part of this effort this paper, a) summarizes recent estimates of dust deposition from Utah and elsewhere in the Great Basin, b) summarizes current knowledge on total and soluble phosphorus loading from dusts, and c) summarizes atmospheric deposition rates of nitrogen from wet, gaseous, and particulate sources. The above information is used to generate estimates of total (urban + regional) nutrient loading to Utah Lake based on local bootstrapped measurements and three attenuation scenarios. Based on the compiled information of observed deposition rates, 80% of estimates fell between 2 and 9 metric tons of Total Phosphorus (TP) deposition to Utah Lake per year. The annual deposition rate of the bioavailable fraction, here defined as the soluble plus organic fraction of phosphorus, is estimated at a minimum of 0.5 to a maximum of 7.9 metric tons, with probable deposition rates between 2-2.5 metric tons per year. Because there is an interest in determining the maximum possible deposition flux of P to Utah Lake, we determined the maximum loads based on the maximum measured deposition rates and phosphorus concentrations applied over the full year, and, extended the urban zone of influence to 2 and 3 times that observed at other large lakes as part of these estimates. Total nitrogen loading is estimated between 153 and 288 metric tons per year base on measurements and models produced elsewhere. Recommendations on best practices for the measurement of particulate deposition onto a large lake are also provided.