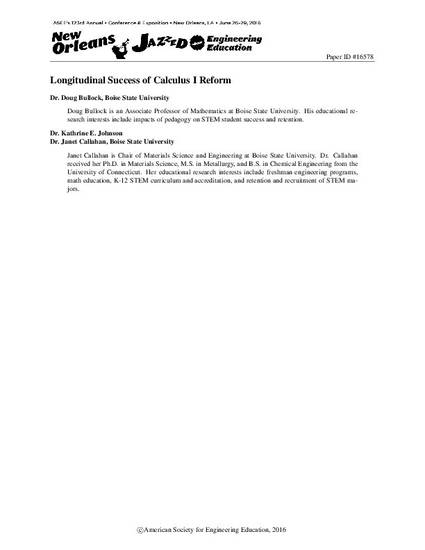 This paper describes the second year of an ongoing project to transform calculus instruction at Boise State University. Over the past several years, Calculus I has undergone a complete overhaul that has involved a movement from a collection of independent, uncoordinated, personalized, lecture-based sections, into a single coherent multi-section course with an activelearning pedagogical approach. The overhaul also significantly impacted the course content and learning objectives. The project is now in its fifth semester and has reached a steady state where the reformed practices are normative within the subset of instructors who might be called upon to teach Calculus I. Gains from the project include a rise in the pass rate in Calculus I, greater student engagement, greater instructor satisfaction, a general shift toward active learning pedagogies, and the emergence of a strong collaborative teaching community.

Project leaders are seeking to expand these gains to other areas of the curriculum and to broaden the community of instructors who are fully accepting of the reforms. Common concerns expressed by faculty resistant to the overhaul include suspicion that pass rate gains might reflect grade inflation or weakened standards, and that altering the traditional content of Calculus I might leave students unprepared for Calculus II. External stakeholders also have a vested interest in ensuring students receive a solid preparation in Calculus I. In this paper we develop a response to ensure solid evidence of Calculus II readiness that we hope will be useful to change agents and campus leaders in many other settings.