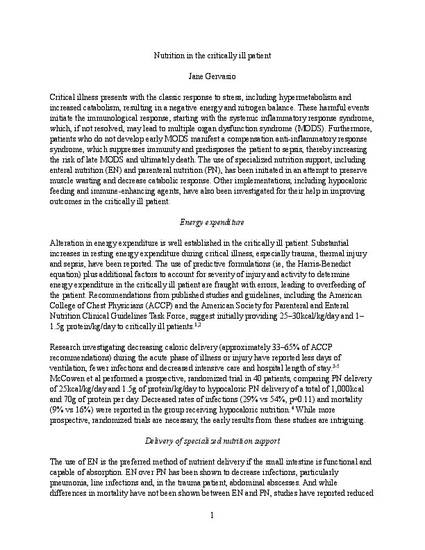 Article
Nutrition in the critically ill patient
Hospital Pharmacy Europe
Download Find in your library
Document Type
Article
Publication Date
Disciplines
Additional Publication URL
http://www.hospitalpharmacyeurope.com/featured-articles/nutrition-critically-ill-patient
Abstract
Critical illness presents with the classic response to stress, including hypermetabolism and increased catabolism, resulting in a negative energy and nitrogen balance. These harmful events initiate the immunological response, starting with the systemic inflammatory response syndrome, which, if not resolved, may lead to multiple organ dysfunction syndrome (MODS). Furthermore, patients who do not develop early MODS manifest a compensation anti-inflammatory response syndrome, which suppresses immunity and predisposes the patient to sepsis, thereby ­increasing the risk of late MODS and ultimately death. The use of specialized nutrition support, including enteral nutrition (EN) and parenteral nutrition (PN), has been initiated in an attempt to preserve muscle wasting and decrease catabolic response. Other implementations, including hypocaloric feeding and immune-enhancing agents, have also been investigated for their help in improving outcomes in the critically ill patient.
Rights

This is a post-print version of this article. The version of record is available at Hospital Pharmacy Europe.