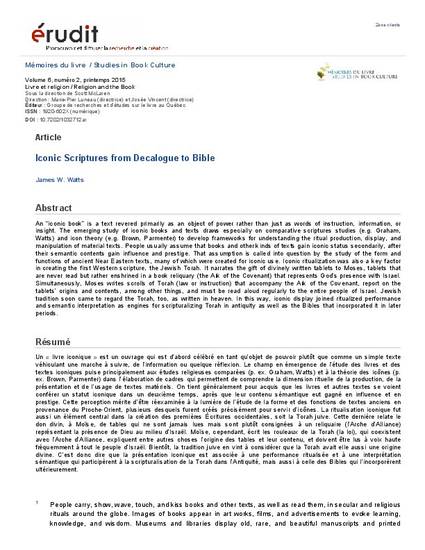 Article
Iconic Scriptures from Decalogue to Bible
Mémoires du livre / Studies in Book Culture (2016)
Download Find in your library
Abstract
An “iconic book” is a text revered primarily as an object of power rather than just as words of instruction, information, or insight. The emerging study of iconic books and texts draws especially on comparative scriptures studies (e.g. Graham, Watts) and icon theory (e.g. Brown, Parmenter) to develop frameworks for understanding the ritual production, display, and manipulation of material texts. People usually assume that books and other kinds of texts gain iconic status secondarily, after their semantic contents gain influence and prestige. That assumption is called into question by the study of the form and functions of ancient Near Eastern texts, many of which were created for iconic use. Iconic ritualization was also a key factor in creating the first Western scripture, the Jewish Torah. It narrates the gift of divinely written tablets to Moses, tablets that are never read but rather enshrined in a book reliquary (the Ark of the Covenant) that represents God’s presence with Israel.
Simultaneously, Moses writes scrolls of Torah (law or instruction) that accompany the Ark of the Covenant, report on the tablets’ origins and contents, among other things, and must be read aloud regularly to the entire people of Israel. Jewish tradition soon came to regard the Torah, too, as written in heaven. In this way, iconic display joined ritualized performance and semantic interpretation as engines for scripturalizing Torah in antiquity as well as the Bibles that incorporated it in later periods.
Keywords
Disciplines
Publication Date
DOI
https://doi.org/10.7202/1032712ar
Citation Information
James W Watts. "Iconic Scriptures from Decalogue to Bible" Mémoires du livre / Studies in Book Culture Vol. 6 Iss. 2 (2016)
Available at: http://works.bepress.com/james_watts/41/
Creative Commons license