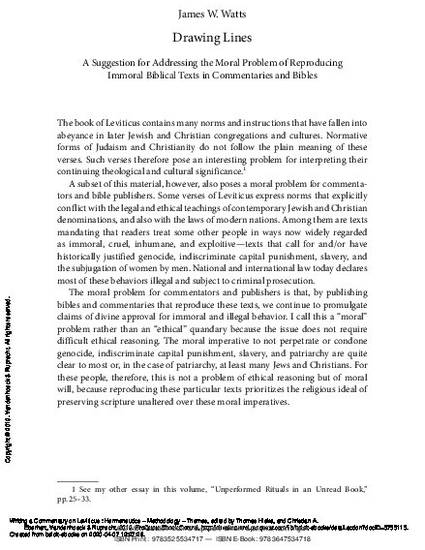 Contribution to Book
Drawing Lines: The Moral Problem of Reproducing Immoral Biblical Texts
Writing a Commentary on Leviticus (2019)
Download
Abstract
Some verses of Leviticus express norms that explicitly conflict with the legal and ethical teachings of contemporary Jewish and Christian denominations, and also with the laws of modern nations. Among them are texts mandating that readers treat some other people in ways now widely regarded as immoral, cruel, inhumane, and exploitative—texts that call for and / or have historically justified genocide, indiscriminate capital punishment, slavery, and the subjugation of women by men. National and international law today declares most of these behaviors illegal and subject to criminal prosecution. The moral problem for commentators and publishers is that, by publishing bibles and commentaries that reproduce these texts, we continue to promulgate claims of divine approval for immoral and illegal behavior.
Modern secular culture joins Jewish and Christian ethical reflection in rejecting indiscriminate capital punishment, slavery, genocide and, increasingly, patriarchy. The history of controversies over these practices, however, shows that biblical texts retain their power to justify actions and institutions despite considerable moral teaching and commentary to the contrary. It is not enough for commentaries simply to argue that particular verses of scripture have been superseded by changing cultural contexts or that, in their original contexts, these verses advocated improvements over existing norms. The iconic status of their continuing appearance in scriptures distributed widely around the world preserves their latent power to be invoked malevolently again and again.
The visual text of these biblical verses should therefore be struck through, so that the moral judgment is immediately apparent to anyone who opens a bible to that page. The strikethrough preserves the position of these verses in biblical literature while clearly marking the interpretive traditions’ repudiation of their normative force.
Keywords
Disciplines
Publication Date
Editor
Hieke, Thomas; Eberhart, Christian A.
Publisher
Vandenhoeck & Ruprecht
ISBN
978-3-525-53471-7
DOI
https://doi.org/10.13109/9783666534713.235
Citation Information
James W. Watts. "Drawing Lines: The Moral Problem of Reproducing Immoral Biblical Texts" GöttingenWriting a Commentary on Leviticus (2019) p. 235 - 252
Available at: http://works.bepress.com/james_watts/37/
Creative Commons License