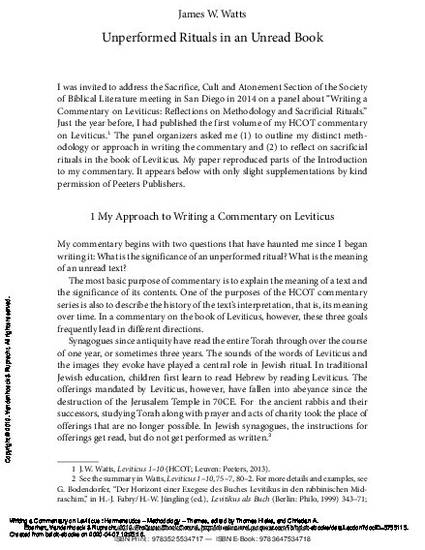 Contribution to Book
Unperformed Rituals in an Unread Book
Writing a Commentary on Leviticus (2019)
Download
Abstract
What is the significance of an unperformed ritual? And what is the meaning of an unread text? The intuitive answer, that unperformed rituals and unread texts have no meaning, is clearly wrong in the case of Leviticus. The rituals depicted in its text mean a great deal, because Jews, Samaritans and Christians continue to ritualize Leviticus as part of their scriptures. Leviticus’s status as the third book of scripture has remained virtually uncontested throughout the histories of these three religions, despite the fact that people do not observe many of its offering instructions or, among Christians, even read much of its text. It retains its place among the sacred scrolls and books reproduced by each religion. Therefore if the job of commentary is to explain the meaning of Leviticus, it cannot stop with the book’s words, much less their original referents. The meanings of Leviticus have been broadcast by the sounds of its words and the sight of the books and scrolls that contain it as much as by semantic interpretations of its contents, which have themselves been manifested in ritual and legal performances as well as in sermons and commentaries. Out of all this emerges the phenomenon of scripture, of which Leviticus is an original and integral part.
Keywords
Disciplines
Publication Date
Editor
Hieke, Thomas; Eberhart, Christian A.
Publisher
Vendenhoeck & Ruprecht
DOI
https://doi.org/10.13109/9783666534713.25
Citation Information
James W. Watts. "Unperformed Rituals in an Unread Book" GöttingenWriting a Commentary on Leviticus (2019) p. 25 - 33
Available at: http://works.bepress.com/james_watts/36/
Creative Commons License