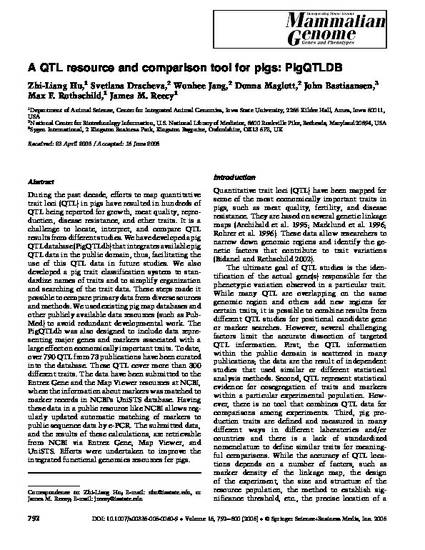 During the past decade, efforts to map quantitative trait loci (QTL) in pigs have resulted in hundreds of QTL being reported for growth, meat quality, reproduction, disease resistance, and other traits. It is a challenge to locate, interpret, and compare QTL results from different studies. We have developed a pig QTL database (PigQTLdb) that integrates available pig QTL data in the public domain, thus, facilitating the use of this QTL data in future studies. We also developed a pig trait classification system to standardize names of traits and to simplify organization and searching of the trait data. These steps made it possible to compare primary data from diverse sources and methods. We used existing pig map databases and other publicly available data resources (such as PubMed) to avoid redundant developmental work. The PigQTLdb was also designed to include data representing major genes and markers associated with a large effect on economically important traits. To date, over 790 QTL from 73 publications have been curated into the database. Those QTL cover more than 300 different traits. The data have been submitted to the Entrez Gene and the Map Viewer resources at NCBI, where the information about markers was matched to marker records in NCBI’s UniSTS database. Having these data in a public resource like NCBI allows regularly updated automatic matching of markers to public sequence data by e-PCR. The submitted data, and the results of these calculations, are retrievable from NCBI via Entrez Gene, Map Viewer, and UniSTS. Efforts were undertaken to improve the integrated functional genomics resources for pigs.

Rights
Works produced by employees of the U.S. Government as part of their official duties are not copyrighted within the U.S. The content of this document is not copyrighted.
Language
en
File Format
application/pdf
Citation Information
Zhi-Liang Hu, Svetlana Dracheva, Wonhee Jang, Donna Maglott, et al.. "A QTL Resource and Comparison Tool for Pigs: PigQTLDB" Mammalian Genome Vol. 1 Iss. 10 (2005) p. 792 - 800
Available at: http://works.bepress.com/james_reecy/53/