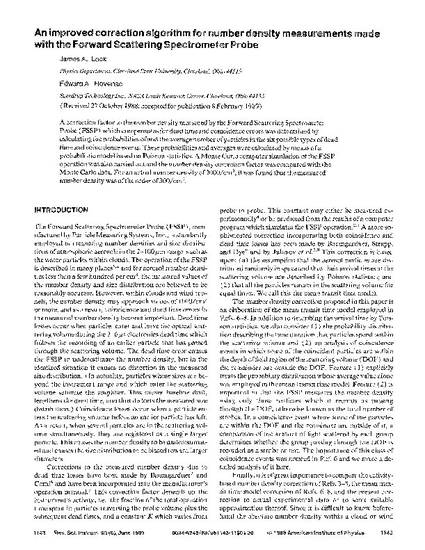 A correction factor to the number density measured by the Forward Scattering Spectrometer Probe (FSSP) which compensates for dead time and coincidence errors was determined by calculating the probabilities of and the average number of particles in the six possible types of dead time and coincidence events. These probabilities and averages were calculated by means of a probabilistic model based on Poisson statistics. A Monte Carlo computer simulation of the FSSP operation was also carried out and the number density correction factor was compared with the Monte Carlo data. For an actual number density of 2000/cm3, it was found that the measured number density was of the order of 300/cm3.

DOI
10.1063/1.1140329
Version
Publisher's PDF
Publisher's Statement
Copyright 1989 American Institute of Physics. This article may be downloaded for personal use only. Any other use requires prior permission of the author and the American Institute of Physics. The following article appeared in Review of Scientific Instruments 60 (1989): 1143-1153 and may be found at http://link.aip.org/link/doi/10.1063/1.1140329
Citation Information
Lock, James A. and Edward A. Hovenac. "An Improved Correction Algorithm for Number Density Measurements Made with the Forward-Scattering Spectrometer Probe." Review of Scientific Instruments 60 (1989): 1143-1153.