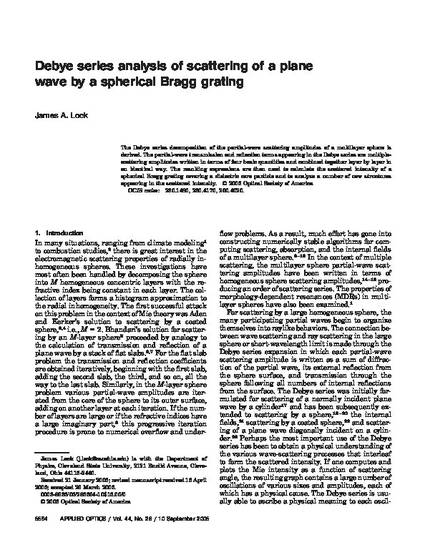 The Debye series decomposition of the partial-wave scattering amplitudes of a multilayer sphere is derived. The partial-wave transmission and reflection terms appearing in the Debye series are multiple-scattering amplitudes written in terms of four basic quantities and combined together layer by layer in an identical way. The resulting expressions are then used to calculate the scattered intensity of a spherical Bragg grating covering a dielectric core particle and to analyze a number of new structures appearing in the scattered intensity. (c) 2005 Optical Society of America.

DOI
10.1364/AO.44.005594
Version
Publisher's PDF
Publisher's Statement
This paper was published in Applied Optics and is made available as an electronic reprint with the permission of OSA. The paper can be found at the following URL on the OSA website: http://www.opticsinfobase.org/ao/abstract.cfm?URI=ao-44-26-5594. Systematic or multiple reproduction or distribution to multiple locations via electronic or other means is prohibited and is subject to penalties under law.
Citation Information
Lock, James A. "Debye Series Analysis of Scattering of a Plane Wave by a Spherical Bragg Grating." Applied Optics 44 (2005): 5594-5603.