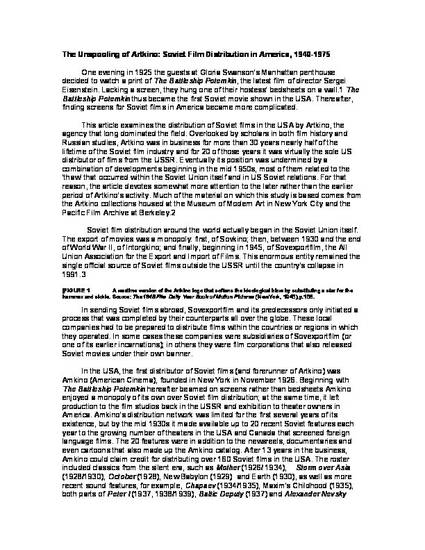 Article
The Unspooling of Artkino: Soviet Film Distribution in America, 1940-1975
Historical Journal of Film Radio and Television
Download Find in your library
Document Type
Article
Publication Date
Disciplines
Abstract
The article discusses the distribution of Soviet motion pictures in the U.S. by distribution company Artkino, from 1940 to 1975. The author states that Artkino was virtually the sole U.S. distributor of movies from the Soviet Union for 20 of those years. Discussion is offered relating the conditions of the Soviet film sector in the U.S. as well as describing the marketing and business management of the company. Comments are also given profiling the first Soviet film distributed in the U.S. "The Battleship Potemkin," directed by Sergei Eisenstein, and other typical films of the era.
Comments