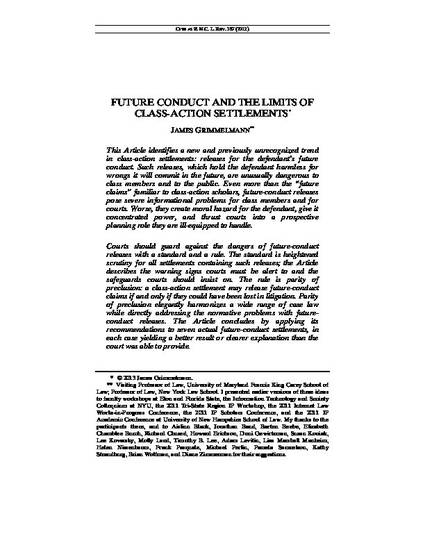 This Article identifies a new and previously unrecognized trend in class-action settlements: releases for the defendant’s future conduct. Such releases, which hold the defendant harmless for wrongs it will commit in the future, are unusually dangerous to class members and to the public. Even more than the “future claims” familiar to class-action scholars, future-conduct releases pose severe informational problems for class members and for courts. Worse, they create moral hazard for the defendant, give it concentrated power, and thrust courts into a prospective planning role they are ill-equipped to handle.

Courts should guard against the dangers of future-conduct releases with a standard and a rule. The standard is heightened scrutiny for all settlements containing such releases; the Article describes the warning signs courts must be alert to and the safeguards courts should insist on. The rule is parity of preclusion: a class-action settlement may release future-conduct claims if and only if they could have been lost in litigation. Parity of preclusion elegantly harmonizes a wide range of case law while directly addressing the normative problems with future- conduct releases. The Article concludes by applying its recommendations to seven actual future-conduct settlements, in each case yielding a better result or clearer explanation than the court was able to provide.