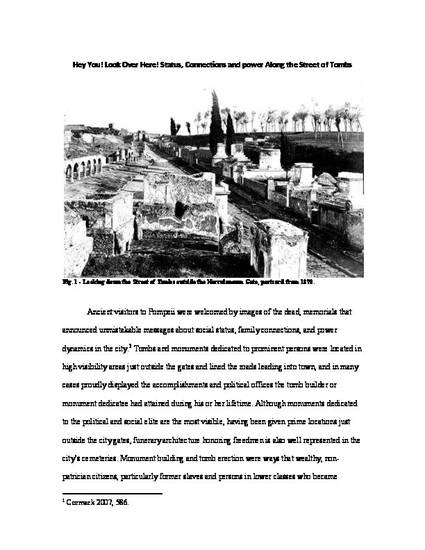 Unpublished Paper
Look Over Here! Status, Connections and power Along the Street of Tombs
(2012)
Download
Abstract
Ancient visitors to Pompeii were welcomed by images of the dead, memorials that announced unmistakable messages about social status, family connections, and power dynamics in the city. Although monuments dedicated to the political and social elite are the most visible, having been given prime locations just outside the city gates, funerary architecture honoring freedmen is also well represented in the city’s cemeteries. Monument building and tomb erection were ways that wealthy, non-patrician citizens, particularly former slaves and persons in lower classes who became successful merchants and tradesmen, were able to show themselves as benefactors and participants within Pompeian society. The tombs attributed to freedmen, including their decoration and inscriptions, shed light on Pompeian as well as wider Roman social and political structures and how status was established and perceived through funerary monuments. This paper analyzes a selection of tombs attributed to manumitted slaves and compares their epigraphy and decoration, exploring the possible interpretations they invited in their own time as well as in our own.
Keywords
Disciplines
Publication Date
Citation Information
Jade Finlinson. "Look Over Here! Status, Connections and power Along the Street of Tombs" (2012)
Available at: http://works.bepress.com/jade-finlinson/4/
Creative Commons License