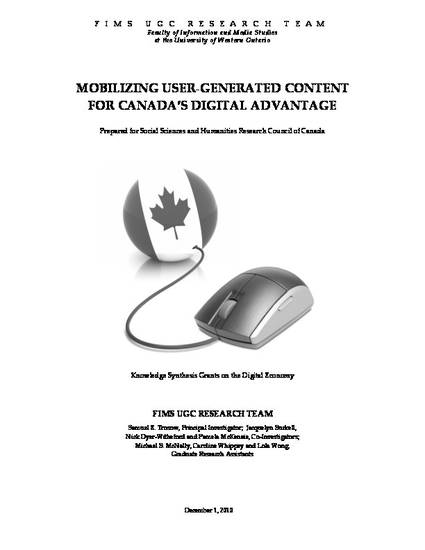 Executive Summary: The goal of the Mobilizing User-Generated Content for Canada’s Digital Content Advantage project is to define User-Generated Content (UGC) in its current state, identify successful models built for UGC, and anticipate barriers and policy infrastructure needed to sustain a model to leverage the further development of UGC to Canada's advantage. At the outset, we divided our research into three domains: creative content, small scale tools and collaborative user-generated content. User-generated creative content is becoming increasingly evident throughout the technological ecology through online platforms and online social networks where individuals develop, create and capture information and choose to distribute content through an online platform in a transformative manner. The Internet offers many tools and resources that simplify the various UGC processes and models. Social networking sites such as Facebook, Twitter, YouTube, Vimeo, Flickr and others provide functionality to upload content directly into the site itself, eliminating the need for formatting and conversion, and allowing almost instantaneous access to the content by the user’s social network. The successful sites have been able to integrate content creation, aggregation, distribution, and consumption into a single tool, further eroding some of the traditional dichotomies between content creators and end-users. Along with these larger scale resources, this study also treats small scale tools, which are tools, modifications, and applications that have been created by a user or group of users. There are three main categories of small scale tools. The first is game modifications, or add-ons, which are created by users/players in order to modify the game or assist in its play. The second is modifications, objects, or tools created for virtual worlds such as Second Life. Third, users create applications and tools for mobile devices, such as the iPhone or the Android system. The third domain considers UGC which is generated collaboratively. This category is comprised of wikis, open source software and creative content authored by a group rather than a sole individual. Several highly successful examples of collaborative UGC include Wikipedia, and open source projects such as the Linux operating system, Mozilla Firefox and the Apache platform. Major barriers to the production, distribution and aggregation of collaborative UGC are unduly restrictive intellectual property rights (including copyrights, licensing requirements and technological protection mechanisms). There are several crucial infrastructure and policies required to facilitate collaborative UGC. For example, in the area of copyright policy, a careful balance is needed to provide appropriate protection while still allowing downstream UGC creation. Other policy considerations include issues pertaining to technological protection mechanisms, privacy rights, consumer protection and competition. In terms of infrastructure, broadband internet access is the primary technological infrastructure required to promote collaborative UGC creation. There has recently been a proliferation of literature pertaining to all three of these domains, which are reviewed. Assessments are made about the most effective models and practices for each domain, as well as the barriers which impede further developments. This initial research is used as a basis for generating some tentative conclusions and recommendations for further research about the policy and technological infrastructures required to best mobilize and leverage user-generated content to create additional value in the digital economy internal and external to Canada. Policy recommendations based on this research focus on two principles: balancing the interest of both content owners and users, and creating an enabling environment in which UGC production, distribution, aggregation, and re-use can flourish.

Prepared for the Social Sciences and Humanities Research Council of Canada by the FIMS UGC Research Team at The University of Western Ontario.